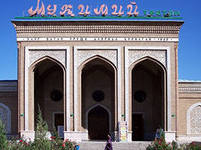 The Uzbek State Music Theatre Mukimi was founded November 30, 1939. The theatre premiere was comedy “Maysara’s tricks”, which was shown by the largest Uzbek masters of musical and dramatic theatre.
However, its activity was begun in 1929; it was called the Uzbek Opera House, which was both opera and musical drama. During the World War, there was shown the performance about the exploits of soldiers and commanders of the Soviet Army. Later the theatre’s repertoire was included plays of modern life of Uzbekistan.
In 1939 there was division of the opera (now State Academic Bolshoi Theater named after Navoi) and music (now the State Musical Theatre named after Mukimi). In 1943 the new building of State Musical Theatre of Drama and Comedy was constructed.