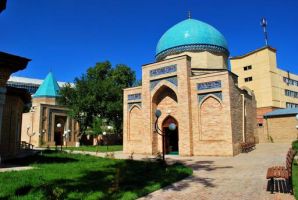 Kaldyrgach-biy (Tole bi) Mausoleum was built in the first half of the XV century in Tashkentcity. There are remains of the eminent Kazakh politician Tole bi "Kaldyrgach" that means ("Swallow"), hence the name of the mausoleum. Tole bi was governor of Tashkent since 1743 to 1749 years. Unfortunately, the courtyard and the decoration of the mausoleum are not preserved. Kaldyrgach-Bii was the ruler of Mogolistan and Khoja Ahrar’s ancestor.

A dome in the form of a pyramid is in the unique composition of the mausoleum. It is a rare design for Uzbekistan. There are four niches, brick stairs and khujdras in the hall. Small square crypt is under the main hall. The facade of the mausoleum is not lined. There is a legend that says when people find out about the Kalmyks’ attack, they began to leave in a hurry their houses, strangely enough, but Tole bi wasn’t going to leave his house. "Why are not you going to leave your house" – asked people. “One swallow built a nest on the roof of my house," - replied Tole. After hearing the answer, the Kalmyks commander decided not to touch his house. Local residents of Tashkent and Shymkent don’t call the name Tole bi, but they say "Holy swallow" (Kaldyrgach-Biy).

Kaldyrgach-biy Mausoleum is very honored by Kazakhs living in the Tashkent region and in the south of Kazakhstan. This architectural monument is the oldest surviving monuments in Tashkent and is one of the popular attractions of the country.