The following measures are taken against the covid-19 virus in this tour.
Read more
Tour itinerary: Tashkent - Khujand - Tashkent
Season: all the year round
Days: 1 | Nights: 0 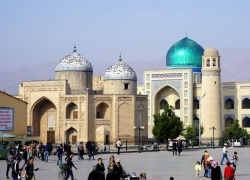 One-day tour to Khujand is a unique opportunity to visit the ancient city that 2500 years ago was occupied by Alexander the Great. He gave the city his name - Alexandria Eschate, that could be translated as Alexandria the Furthest.

Also, historical rumours say that Alexander is buried somewhere in Khujand , but those are still myths and noone still knows the truth. Khujand has some certain sights to explore - esp. Timur Malik Fortress. Dedicated to the savior of Khujand, now the fort is a museum and souvenirs shop. Its walls are 4m wide.

Join our one-day excursion and learn more about these of ancient Silk Road places.

09:30 On arrival, border passing formalities: visa and passport control. Meet the driver and guide on Tajikistan side of the border and transfer to Khudjand (70km, 1h.) – center of Sugd  region of Northern Tajikistan.

Khudjand was the furthest point Alexander the Great reached in Central Asia, the city was named Alexandria Eschate (Alexandria the Farthest), the city became one of the important entrepots on  the great Silk Road.

Start of the excursion program:

- Panjshanbe bazaar (Khujand’s central market that has many stores offering different kind of goods and services. The name Panjshanbe comes from Persian language meaning “Thursday”. Panjshanbe is considered as one of the oldest markets in Tajikistan. The Silk Road which passes Khujand city, had always made Panjshanbe to be crowded with traders and tourists).

- Arbob Palace (Arbob palace had its particular significance in 1992, when it was the place for the meeting of the Tajik Soviet ministers which officially declared independence from the Soviet Union. Also, it was the site where the Tajik flag was chosen).

In the evening we will transfer back to Tajik - Uzbek border pass.

Pass to Uzbekistan and meet up with a driver and transfer back to Tashkent. End of the tour.

- Entrance tickets to the famous places, museums, mausoleums, as per program;

-Other services not specified under “Tour price includes.