The following measures are taken against the covid-19 virus in this tour.
Read more
Tour itinerary: Samarkand - Penjikent - Samarkand
Season: All the year round
Days: 1 | Nights: 0 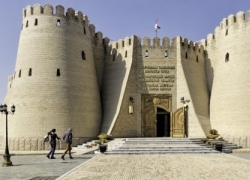 One day tour to Penjikent from Samarkand

The city of Penjikent in the south-west of the Sogd region of Tajikistan is rightfully considered one of the oldest cities in Central Asia.

For one day we will plunge into the atmosphere of an ancient city, founded more than two thousand years ago. You will spectate beautiful mosques dressed in mosaics and carvings, surrounded by green and flowers, or snows & silence.

Enjoy an exciting adventure in the city of Penjikent - an unforgettable experience is guaranteed!

09:00 Arrival. Pass the border, border passing formalities: visa/passport control. Meet the guide and driver at Tajikistan side of the border.

Arrival and start the excursion program in Penjikent.

- Museum of Rudaki – As Penjikent is a birthplace of Abu-Abdallah Rudaki, considered by many to be the father of Persian Poetry.

- Ancient Penjikent - the ruins of the old Sogdian town founded in the 5th century and abandoned in the 8th century by Arabs. Foundations of houses, a citadel with a couple of Zoroastrian fire temples and city bazaar are visible in the excavated ruins

- Sarazm ruins - one of the ancient settlements in Central Asia with a 5500-year civilization. In 2010 Sarazm was added to the list of Human Heritage by UNESCO.

In the evening transfer back to Tajik - Uzbek border pass.

Cross the border to Uzbekistan and meet the driver and transfer back to Samarkand.

- Entrance tickets to the sites, museums, mausoleums, as per program;

- Other services which not specified under “Tour price includes”.

- The program can be adjusted for a private tour, the price of individual/private tour will be different;