The following measures are taken against the covid-19 virus in this tour.
Read more
Tour itinerary: Tashkent - Termez - Nukus - Khiva - Bukhara - Samarkand -Tashkent
Season: all the year round
Days: 12 | Nights: 11 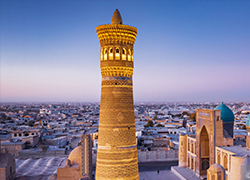 This 'ziyorat' religious tour going to introduce you to the most known religious places in Uzbekistan. All of them were built very long ago but still, represent a proud spirit of passed away great dynasties and warriors of the East.

Uzbekistan has a lot of holy places related to Zoroastrianism and Buddhism, many of them are located in Termez, previously known as a centre of Zoroastrian culture. We are proviing excursion to these places with a certified English-speaking guide.

Enjoy your stay in Uzbekistan, explore it sightseeing objects and acknowledge more about this wonderful place!

Arrival in Tashkent in the afternoon/evening.

Come out of the terminal and meet the driver holding a sign “ANUR TOUR” with your name on it. Transfer to the hotel.

Transfer to the hotel to drop off the bags. Standard check-in is in 14:00 PM local time. We can arrange your early check-in for an additional charge.

Start of a sightseeing tour in Tashkent (5 hours) with a visit to all significant places of Zoroastrian and Buddhist spiritual places:

Overnight in the hotel.

08:00 Breakfast in the hotel, early check-out

11:35 Arrival in Termez. Meet up with our guide and driver and start excursion.

You will start the tour from an ancient Buddhist center - Kokildor-Ota Khanaka. Then you'll follow your guide to visit an impressive monument of the ancient Samani dynasty - a Kyrk-Kyz fortress. Legends say that 40 tireless spirits of 40 emirs' daughters are still there traveling endlessly.

Then you will head over to Ensemble named Sultan Saodat after a famous emir who built it during his life. After that you'll see the most known monument of Zoroastrian culture - Zurmala Tower or so-called Buddha's stupa.

And for the last ones you'll observe several Buddhist archaeological sites of Kara-Tepe, Fayaz-Tepe, and Mausoleum of Al-Hakim at-Termezi.

Transfer from the hotel to the north side of Termez - to observe ancient Greco-Bactrian Kingdom fortress called Kampyr-tepe. After this you'll visit Jarkurkan Minaret which is located in the suburb of Termez. On a way back to Termez you will have time to enjoy views of Surkhan oasis and Friendship Bridge, which connects Uzbekistan and Afghanistan.

20:40 Departure to Tashkent via evening flight.

XX:XX Transfer to the airport for departure to Nukus via morning flight.

12:00 Arrival in Nukus, transfer straight to the Savitsky Karakalpakstan Art Museum. It's a unique museum hosting the second world's largest collection of Karakalpak and avant-garde arts & art items. It was named after its founder - Igor' Vitalyevich Savitsky who hadn't only collected the artifacts of Karakalpak culture but also drew pictures himself.

Overnight in the yurt.

Day 5
Land of -Kalas - Khiva
Breakfast in the yurt camp.
Transfer to a large fortress called Gayur-Kala - a big reminder of the past when khans ruled this place. Then you'll see Koi-Krylgan Kala and the fort of Toprak-Kala where the Khan of Khorezm had built his residence.
Drive to Khiva (200~ km)
Arrival in Khiva. Accommodation in the hotel.
Overnight at the hotel.
Day 6
Khiva

Breakfast in the hotel

09:00 Start walking excursion in the historical part of Khiva – Ichan-kala (translated as “Inner town”). Ichan-kala - the largest Museum in the open air in Central Asia consisting from the next monuments:

Standard check-out. Drive to Bukhara via vehicle or train (depends on the weather and train tickets availability). We will follow the Great Silk Road route through Kyzylkum, the current highway copies it completely.

Quick stop en-route to enjoy views of Amudarya River and the desert.

Arrive in Bukhara late in the afternoon, check in to the hotel.

– Caravanserai Saifuddin (the Center of Handicraft Development of Bukhara);

– There are three trading places or so-called covered bazaars: Toki Sarrofon, Toki Telpak Furushon, and Toki Zargaron preserved from the XVI century. These bazaars were the centers for trade of silk, jewelry and even for money exchange. Today as well, one can enjoy and purchase different souvenirs of a wide range, from small souvenir magnets to the famous Bukhara carpets;

– Visit Ulughbek and Abdulazizkhan Madrassas or so-called Kosh (pare) madrassas standing in front of each other with a distinctive style of facade ornamental decoration;

– Poi Kalon Square with Kalon Minaret and Mosque, Mir Arab Madrassa – the heart of Bukhara, a monumental complex impressing the imagination of every visitor;

Optionally can be added by request: a quick visit to Samanids mausoleum (IX century), a monument of early medieval architecture with a local guide.

Finish your excursion. Back to the hotel. Free time. Overnight.

Day 9
Bukhara - Samarkand
Bukhara-Samarkand
Breakfast in the hotel.
Continue Bukhara tour by visiting the following places: Sitorai Mokhi-Khosa - the last shelter of Bukhara's emir Seid Alim-Khan; Mausoleum of Bakhouddin Naqshbandi.
After lunch transfer to Samarkand via vehicle, because of quick stop-by at Caravanserai named after Rabat-i-Malik. This great building is dated from the 11th century.
Arrival in Samarkand. Check-in to the hotel.
Free time. Overnight.
Day 10
Samarkand
Breakfast in the hotel.
09:00 Start sightseeing program (5-6hours):
–Gur Emir Mausoleum – a burial vault of Timur the Great and his descendants is decorated with gold ornaments and is considered as one of the most significant sights of the world;

– Bibi Khanim Mosque – the biggest medieval building in the city was one of the most magnificent mosques in the Islamic world in 15th Century;

– Shahi Zinda Necropolis - unique complex of Mausoleums formed by standing on both sides of the cenotaph (an imaginary grave) of the Muslim saint Abbas ibn-Kussam;