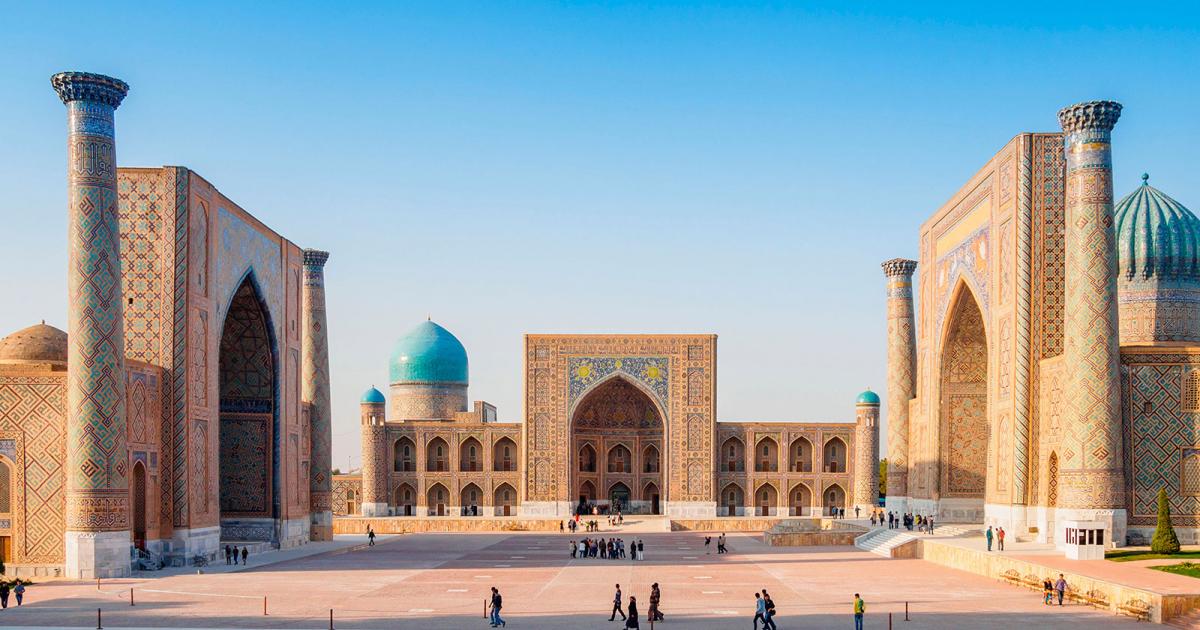 Registan is a huge area in the center of the old part of Samarkand, which has three majestic medieval universities (madrasa) - Ulugbek (left), Tilla-Kari (central) and the Sher-Dor (right). From Uzbek "reg" means sand, "stan" - a place.

Registan in Samarkand is a unique example of urban art, as well as a remarkable example of the architectural design of the main square. All three madrasas were built at different times.

Ulugbek Madrasah was built in 1417-1420 years by the astronomer Ulugbek and ruler of the state Timurid, is the oldest madrasa in Registan Square. Theology, mathematics, philosophy, astronomy and logic were studied here. Lectures were read by famous scientists of that time, and also by Ulugbek.

The building is a rectangular yard; there was a mosque-audience in the back part of the yard. Four minarets were stood in the corner; fifty hujras were situated around a courtyard. Despite its majesty and monumentally, the building seems light and graceful. Architectural decoration of madrasa is varied and rich. The mosaic decoration with geometric designs is above the arch, which made of color blocks and carved ceramics. The construction of this building, which later became the observatory and one of the main centers of science of Medieval East.

Madrasah Sher-Dor (madrasah with “lions”, “Resident lions”) is situated in the eastern part of the square, opposite the Ulugbek madrasah, was built in 1619-1636 years. The building structurally resembles the Ulugbek madrasah, though is different, for example, excessively large size dome. The walls of madrasah are covered with quotation from the Koran, there is the emblem of Samarkand in the entrance of the portal and in the center of the arch is placed a swastika. Glazed brick, paintings with lots of gold, mosaic collection are decorated the outer and inner facades. The latest architectural innovations of that time were used during the construction of the building. Thanks to its architectural features, the building is considered one of the most beautiful architectural monuments of Samarkand. 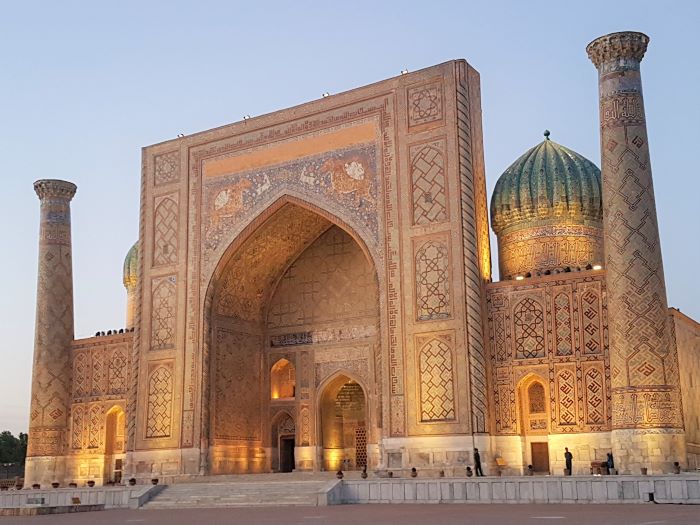 The construction of Madrasah Tilla-Kari lasted more than 14 years, from 1646 to 1660 by order of the governor of Samarkand Yalangtush Bii Bahadur. The building is located in the northern part of the Registan square, which completes the ensemble of three madrasahs. It is a square structure of the total area of 75x75metre. On the west side is portal-domed mosque building Tilla-Kari and additional yard portals. The mosque consists of three parts. There is a room in the center, where there are mihrab and minbar &‐ pulpit for the Imam. The main building of the mosque has an original and interesting décor, which is made in Bukhara style; there is also the central portal with arched niches. Decorative painting covers the walls and dome painted in technology kundal with abundant use of gild, hence the name Tilla-Kari, which means “covered with gold”.