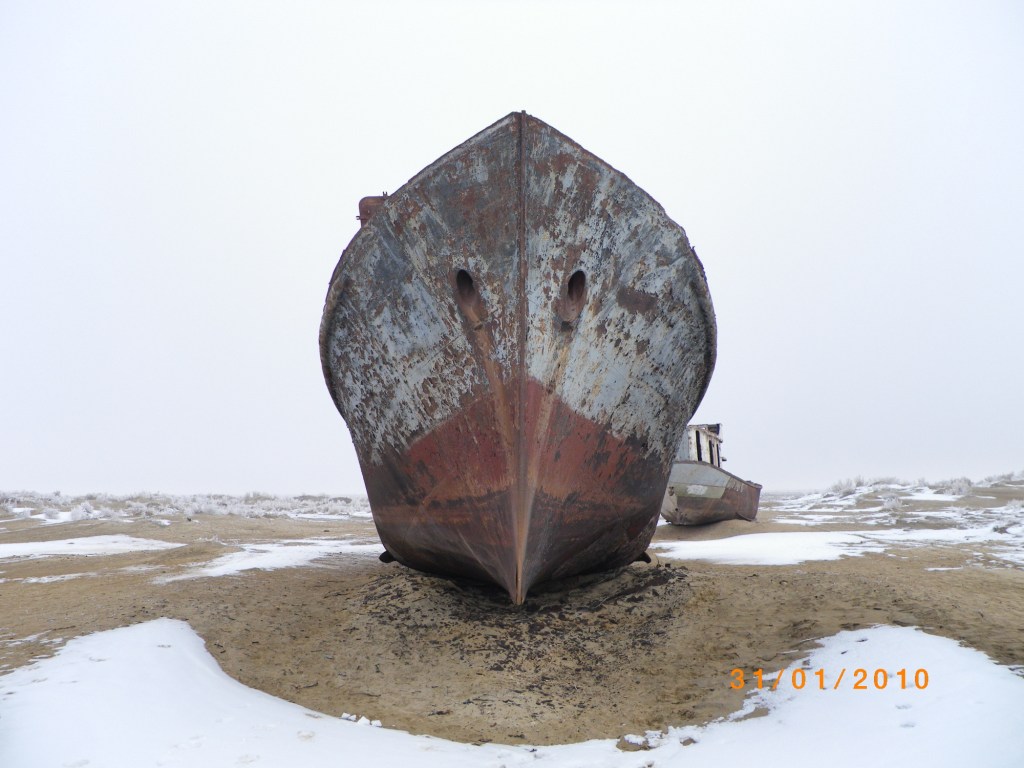 Muynak is originated from turk “moynak”, it is widely presented in the geographical terminology among the Turkic languages. Muynak is located in the Amudarya mouth. From the Kazakh language it is translated as “isthmus”, “narrow strip of water"," narrowing of the stream canal", "strip of land, sand", "shallow".
Muynak is the city of autonomous Karakalpakstan, the Republic of Uzbekistan. The city is located 200 km. from Nukus. In 1991 the population of the city was 13 000 of people. Today it is fewer, because the ecological situation of the dying Aral became worse. Dust storms spread the salt and chemicals at a distance of 500 km. Sodium bicarbonate, sodium chloride and sodium sulfate are carried through the air and kill or retard the development of natural vegetation and agricultural crops. The climate in the Aral Sea zone in winter of -40 and +40 in summer, there is little rainfall.
In 1960-s the construction of melioration canals for cotton irrigation from the Amu Darya River began. The Aral Sea began to shallow. The Aral Sea is the former closed salt lake in Central Asia, bordering on Kazakhstan and Uzbekistan. Since the 1960-s of the XX century the sea level (and water volume in it) was rapidly declining due to diversion of water intake from the main feeder rivers: the Amu Darya and the Syr Darya for irrigation purposes. In 1989, the sea split into two isolated ponds - Northern (Small) and Southern (Big). Before the shallowing the Aral Sea was the fourth largest lake in the world.
The area of the Aral Sea is rapidly decreasing. Towns and villages that once stood on the shore, are now far away from it. The same is with Muynak, once located on the shore of the Aral Sea, now it is separated from the sea by 200 kilometers. Until 1980-s, on the shores of the Aral Sea there was a port, as well as a fish cannery, which brought profit to the local population.
Today Muynak is a city-museum or “ship cemetery”. Once sea vessels were floating in the sea, but today they stand at the port of Muynak city on the famous “ship cemetery”. Perhaps they will never surf the waves of the Aral Sea, so they are thrown, rust and sink into oblivion. And for the convenience of the tourists the ships were dragged into one place by the local "head of the museum". 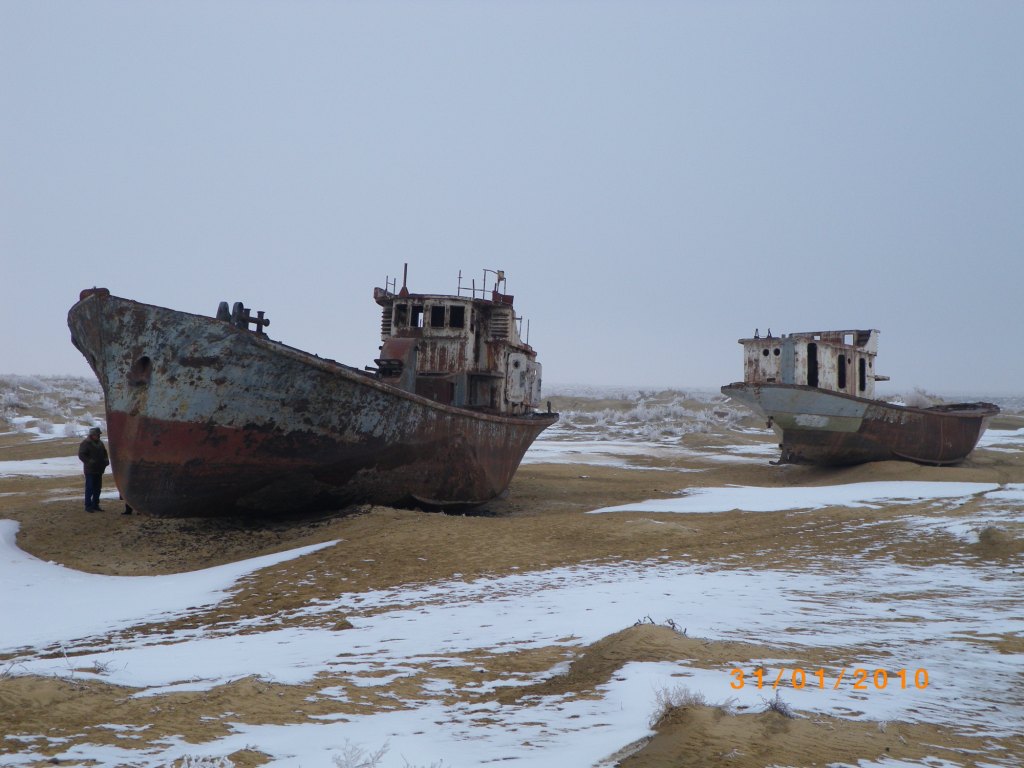 In the 70s. the shipping in the Aral Sea was stopped, although as local old-timers remember in the late 50s - early 60s. the ships were walking in the Aral Sea, and the fishing was profitable. Local residents called the Aral Sea area Aralkum, it turned into a desert, and resembled the bottom. Externally Aralkum is really like a desert: seashells, sand and tangle of saxaul. In the desert you can see lonely grazing camels.
Muynak was a wealthy port island in the delta of the Amu Darya - the main sea gate of Uzbekistan. The ships came loaded with fuel, food and fish, and left Uzbekistan with bales of cotton. When the Aral Sea began to shoal, a 20-kilometer canal was dug. But it was useless. The sea went even further, the graveyard of ships grew around the city, the airport was closed, some fishermen went away, some died, some men were engaged in trade, some - in breeding camels. Before they had the sea, and as a result they had the Aralkum desert, Aral sends.
Strange as it may seem, a man killed a local nature, but nature helps a man to live here. The Aral Sea disappeared, but a freshwater lake, large enough, arose some kilometers from the Aral Sea. It decided the problem of drinking water. There is fish in the lake, and more over it is big enough.
Along the way, you can drive into the cattle bazaar, ask the price of camels and donkeys. On the way there is also a chaykhona, where truck drivers often stop. In the city there is a cinema Berdakh 1976, named in honor of the great poet Berdakh. Berdakh was born here.
The airport is located in the south-east of the city. At present it is not used for passengers transport. You can get there by car.
Recently in Muynak region natural gas has been discovered. It is favorable news for the region.
As stated above, Muynak is a home of the famous Karakalpak poet, Berdakh (real name and surname - Berdimurat Kargabaev) (1827-1900). The artistic heritage of Berdakh takes a special place in the spiritual life of the Karakalpak people. In his best works, a brave civil voice in defense of human rights of his people sounds. Peope were subjected to inhuman oppression in his "iron age". More accurately and truthfully the thoughts and aspirations of deprived people of labour are expressed. Berdakh’s poems are translated into many languages of the fraternal peoples of our country; they are included into the golden fund of classical poetry of the past.