The following measures are taken against the covid-19 virus in this tour.
Read more
Tour itinerary: Uzbekistan – Turkmenistan
Season: all the year around
Days: 10 | Nights: 9 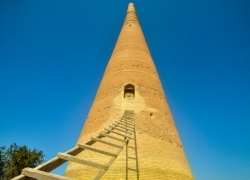 Migration formalities usually take 20 min to 60 min: visa/passport control and baggage claim.  Come out of the terminal and meet the staff holding a sign “ANUR TOUR” or with your name on it.

Transfer to the hotel. As Tashkent airport not far from the city center, transfer will not take long time (20 – 40 minutes depending on the hotel location).

10:00 Meet the guide at the lobby. Start sightseeing tour of Tashkent (5 hrs):

09:00 Start WALKING excursion in the historical part of Khiva – Ichan-kala (translated as “Inner town”). Ichan-kala - the largest Museum in the open air in Central Asia consisting from the next monuments:

08:30 Meet the driver at the lobby .Transfer to Turkmen – Uzbek Border post Khojeyli.

Pass the border. Border passing formalities (passport and visa control might take 1 to 2 hrs depending on the customs formalities). Meet the guide and driver at Turkmen side. Transfer to Kunya – Urgench. Start sightseeing tour with visiting

- mausoleum Arslan II (the oldest building in the city - date of its bookmark is roughly estimated by XI century).

Transfer to the hotel. Resting time in the evening. Overnight.

Transfer to the Ashgabat airport.