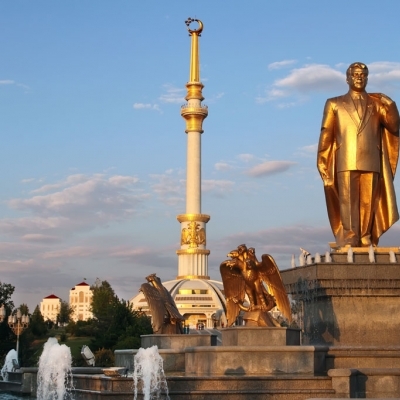 A short and interesting Turkmenistan - Uzbekistan tour covers the most popular historical and natural places. One-week tour is a great option for travelers who would like to experience more in less time.

Arrival in Ashgabat in the early morning.

Meet the staff holding a sign “ANUR TOUR” or with your name on it.

Transfer to the hotel. Check in. Resting time after the flight.

-Turkmenbashi Mosque-Mausoleum. It is considered the biggest in Central Asia (10 thousands of people). There are beautiful garden and fountains near the mosque.

- Anau mosque ruins of 15 Century  and Anau culture remains of the Bronze Age in the suburban area of Ashgabat;

- Ahalteke horse stables, where you will have an opportunity to see the most beautiful horses in the world. Archeologists and historians proved that horses were handled on the territory of Turkmenistan minimum five thousand years ago. The specialists note that foothill lands of Kopetdag made favorable ecological conditions for the birth of strapping and wanton horses.

- Transfer to Darvaza crater and change from the asphalt road to the Karakum desert track, continue 10 km deep inside.

In 1971 geologists accidentally found an underground cavern filled with natural gas. To avoid poisonous gas discharge, it was decided to burn the gas. Geologists hoped the fire would go out in a few days but it has been burning ever since. Locals have named the cavern The Gate - Darvaza. The views are impressive, especially in sunset and night when the mild sunlight and burning crater evoke incredible and ambiguous feelings.

BBQ dinner and overnight stay in yurt or tent.

Pass the border. Border passing formalities (passport and visa control might take 1 to 2 hrs depending on the customs formalities). Meet the driver at Uzbek side of the border.

Start WALKING excursion in the historical part of Khiva – Ichan-kala (translated as “Inner town”). Ichan-kala - the largest Museum in the open air in Central Asia consisting from the next monuments:

07:15 Transfer to the train station

08:23 Train Khiva-Bukhara OR transfer by car (as per train schedule).

Resting  time in the afternoon/evening. Overnight at the hotel.

-Visit Ulughbek and Abdulazizkhan Madrassas or so called Kosh (pare) madrassas opposite each other with distinctive style of facade ornamental decoration;

-Poi Kalon Square with Kalon Minaret and Mosque, Mir Arab Madrassa – the heart of Bukhara, a monumental complex impresses the imagination of every visitor;

17:28 Departure for Tashkent by speed train Afrosiab or Sharq.

-Amir Timur Square, founded in 1882 and originally called Konstantinovsky Square, was renamed in 1994 after of the Amir Temur to honor the cultural and historical contribution of the great conqueror.

-Tashkent chimes, one of major symbols of Tashkent, were brought from defeated Koenisberg in 1945 as a sign of the great victory and eternal glory of patriots who fought in World War II.

-          Independence Square , the main square of Uzbekistan reflects the past, present and future of the country. There are fountains, the “Eternal flame" in honor of soldiers who died during the Second World War, arch " Good and noble aspiration" crowned with birds of happiness and prosperity, road "Ok Yul" (“Good way”) leading to Independence Monument and a monument to Happy Mother that symbolize the hope for a great future.