The following measures are taken against the covid-19 virus in this tour.
Read more
Tour itinerary: Tashkent – Samarkand – Bukhara – Mary – Ashgabat
Season: all the year round
Days: 6 | Nights: 5 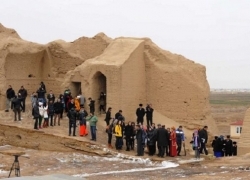 Meet the tour manager who presents the package and you will have time to discuss the tour details.

Meet the guide and start sightseeing tour of Tashkent (5 hrs) visiting old and new parts of the city:

07:30 Departure for Samarkand by train 'Afrosiab' or 'Sharq'.

Come out of the terminal and meet with our driver & guide.

- Bibi Khanim Mosque – the biggest medieval building in the city, was one of the most magnificent mosques in the Islamic world in 15 Century;

08:50 Transfer to the railway station.

Transfer to the hotel to drop off the bags and meet the guide.

08:30 Meet the driver at the lobby. Transfer to Uzbek- Turkmen border post Alat.

Pass the border. Border passing formalities (passport and visa control might take 1 to 2 hrs depending on the customs formalities).

Transfer to hotel. Check in.

- Ancient Nissa (18 km from Ashgabad) UNESCO World Heritage Site. Visit the ruins of the ancient city (the date of foundation of I millennium BC - I millennium BC).

- All transfers as per program by comfortable tourist class/SUV transport as per road conditions including transfers to-from train stations , to- from the borders;

- Uzbekistan: Transport and guide service for free time/free days ( can be added by request) and after the standard city tours; transport for walking tour in Bukhara;