The following measures are taken against the covid-19 virus in this tour.
Read more
Tour itinerary: Uzbekistan – Turkmenistan
Season: all the year around
Days: 7 | Nights: 6 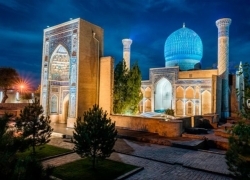 A short journey to the main historical cities of Uzbekistan and Turkmenistan is the a great option for those interested in the culture and history of Central Asia. Enjoy your visit to such famous cities as Samarkand, Bukhara, Mary and Ashgabat.

10:00 Meet the guide at the lobby and start sightseeing tour of Tashkent (5 hrs) visiting:

Pass the border. Border passing formalities (passport and visa control might take 1 to 2 hrs depending on the customs formalities). Meet the guide and driver at Turkmen side of the border.

E-visa to Uzbekistan, migration tax 10+4 USD per person and Turkmenistan tourist visa from 85+4 USD  per person(subject to change; nationality dependent);

Turkmenistan: Tourist fee 2 USD per person per night (obligatory) charged in the hotels;