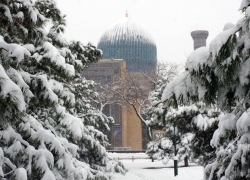 Winter in Uzbekistan is usually soft and snowless. During winter time Uzbekistan tours are going on sale because transfers & all kinds of tickets become cheaper. Tour to Uzbekistan from Malaysia in winter will show you a silent picture of snow time Bukhara, Khiva and Samarkand.

In high season prices tend to increase and that is why we offer this cheap/budget tour to Uzbekistan main cities - Samarkand, Bukhara, Khiva, and Tashkent. You won't be disappointed by anything - discounted tours to Uzbekistan mean the same level of comfort, interesting sightseeing attractions, and attractive prices.

Taking a tour to the Silk Road cities while they are not crowded - is some real estate. And if there will be snow, especially in Bukhara, it means you got super lucky.

Snowed Khiva gently breezed with sandy wind with rare sounds of birds singing would completely describe you a picture of sleepy Uzbekistan in Winter.

06:30 Transfer to the local airport in Tashkent.

Transfer to the hotel and meet the guide at the hotel.

The owners demonstrate the stages of making ceramics from turning the potter’s wheel to making paints from natural ingredients, decorating the ceramics in the distinctive style, drying, and firing.  Take a tour around the museum-hall of ceramic masterpieces with a unique collection of the ceramic items of Gijduvan and other regions of Uzbekistan.

Arrival in Samarkand. Transfer to the hotel, check-in.

- Memorial complex and maqam of Imam Al- Bukhari. Imam Al-Bukhari was the great theologian of the East who collected and wrote down stories, many of which were made to «Shariat». His book “Al-Zhomi as Sahih” includes historical, juridical, biographical, medical, ethical sections. Memorial Imam Al-Bukhari is so honored that the visit of this holy place equates to small hadj.

- Mausoleum of Khoji Doniyor known also as Saint Daniel. Khoja Donier is considered as a saint patron of Samarkand, people believe that a visit to the mausoleum can bring health and success; many visitors come here to make wishes near the almond tree. A holy spring is located at the foot of the hill of the mausoleum; people claim the water has healing and miraculous properties.

- Shahi Zinda Necropolis – a unique complex of Mausoleums formed by standing on both sides of the cenotaph (an imaginary grave) belonging to the Muslim person named Saint Abbas ibn-Kussam.

- First, stop near Beldersay gorge. Take a ride on the chair lift going up to gorge to Kumbel peak (2400 m), where the longest Ski track in Uzbekistan has its start.

- Have lunch in mountain restaurants in the place named "Bochka" by local people.