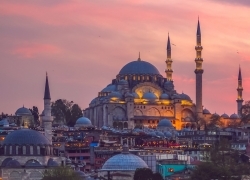 Make your dream holiday come true and book a tour for a special price!

00:55 Flight from Istanbul to Tashkent by Turkish Airlines flight TK 368.

Transfer to the hotel. (Standard check-in)

Start walking excursion in the historical part of Khiva – Ichan-Kala (translated as “Inner town”). Ichan-Kala - the largest Museum in the open air in Central Asia consisting of :

Arrival in Bukhara. Transfer to hotel.

Resting time in the evening.  Overnight at the hotel.

- For groups more than 8 pax there will be escorting English OR Turkish speaking guide as per program;