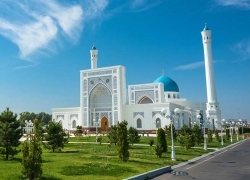 Resting time  after the flight. Overnight at the hotel.

Transfer to the hotel. Check in.

The owners demonstrate the stages of making ceramics from turning the potter’s wheel to making paints from natural ingredients, decorating the ceramics in the distinctive style, drying and firing.  Take a tour around the museum-hall of ceramic masterpieces with a unique collection of the ceramic items of Gijduvan and other regions of Uzbekistan.

- Memorial complex and maqam of Imam Al- Bukhari. Imam Al-Bukhari  was the great theologian of the East who collected and wrote down stories, many of which were made to «Shariat». His book “Al-Zhomi as Sahih” includes historical, juridical, biographical, medical, ethical sections. Memorial Imam Al-Bukhari is so honored that the visit of this holy place equates to small hadj.

Arrival in Samarkand in the afternoon.

Transfer to the hotel, check-in.

09:00 Transfer to Termez via Shahrisabz.

Continue to Termez. Arrival in the afternoon. Hotel check in.

Free time in the afternoon. Overnight at the hotel.

Termez, one of the oldest cities in Central Asia, is located in the Surkhan Oasis, where ancient Buddhist monastery complexes coexisted along with monumental Islamic architectural masterpieces of the region.

- Fortress Kyrk-Kyz - the unique "Kirk Kiz" building ("forty girls”) attracted the attention of researchers for a long time, has been variously considered as a palace, an abbey, a caravansarai, hanaqa, or just simply a civil construction.

- Zurmala – Buddha’s stupa, Buddha complex Fayaz – Tepa – one of the museums in the open air under the protection of UNESCO.

- Mausoleum of Al-Hakim at–Termezi, the founder of the dervish order, an outstanding theologian who wrote numerous religious works and a leader of Islamic mysticism.

- Archaeology Museum of Termez where one can see the unique exhibits found on the territory of Termez and its surroundings.

- All transfers as per program by comfortable tourist class transport as per road conditions including transfers to-from train stations, and airports;
- English-speaking professional licensed local guides in Uzbekistan (6 standard excursions);
- Meals: breakfasts at the hotels;
- Single entry tickets to the sites, museums, mausoleums, and natural fees as per program;