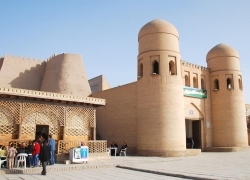 Take a tour to Uzbekistan from foggy Great Britain - to the sun and warmth. Great ancient cities are waiting for you to step on their sandy stone pavements.

And your journey will begin from holy Bukhara - one of the 8 sacred places of Muslim culture in the whole world - you'll see every worth your attention thing, like Po-i Kalon complex and Ark Fortress.

Bukhara is known for its so-called 'hauzes' - the storage tanks which were always placed nearby religious places such as Mosques. The water helped to keep buildings' walls unsalted and strong.

Samarkand is different - warmer, windier and the ornaments are getting into a blue scheme. Blue, sky-blue and gold colors dominating there and Shakh-I Zinda is a great example of medieval mural art.

Also, you will do an excursion to Shakhrisabz - the homeland of Timur the Great. There he built a 60-meter palace called 'Ak-Saroy' (White Palace). Now its only 40 m high, but it was higher. Sadly, the time and winds ruined the beautiful artwork of Iranian and Samarkandian architects.

Book a tour to Uzbekistan right now - and get a chance for a good discount!

Flight from London to Tashkent by Uzbekistan Airways flight HY-202