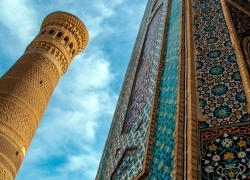 Tour to Uzbekistan from Singapore or Malaysia - great chance to find out what is Uzbekistan, why it was chosen as #1 destination to travel in 2020 and what's so good in it.

This tour could be private or group tour with 8 days/7 nights itinerary, we can adjust it up to your desire anytime. With 'Anur Tour' you will discover a land of miracles - Uzbekistan.

Visit all the holy places with this 8 days tour - Sogdiana, Mawarannahr, Transoxiana, all their places of pilgrimage and learn how ancient believers lived their lives.

A whole history of tough religious conflicts could be also found in Uzbekistan - just listen to our guide carefully. We hire only high-end professionals for telling people about our history, traditions and cuisine.

So, if you want to dive into oriental mix of culture, cuisine and traditions - book this tour and let's meet in Uzbekistan!

Arrival in the hotel. Hotel check-in.