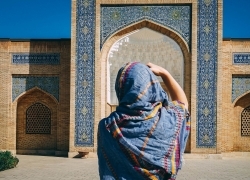 Tour to Uzbekistan from the land of Neverending Summer a.k.a. Malaysia will show you the country of ancient cities in green valleys and desert sands and smiles. Various excursions to the main attractions of Tashkent, Samarkand and Bukhara will show you the tough history and beautiful artworks of this land.

Tours to Uzbekistan include visits to famous Great Silk Road cities Samarkand and  Bukhara - all the excursions are included in the tour package, and being hosted by professional English-speaking guide.

General attractions of Samarkand, for example, start from the excursion to Gur-Emir - the mausoleum of Temur the Great.

During private Bukhara excursion, you will have a complete walking excursion - the objects are located too close to each other and there is no in transferring on a bus each 200 m.

Uzbekistan is worth traveling in 2020 and 2021 - it was rated as #1 destination by many famous journals - such as WeGoPlaces, LonelyPlanet, and The Telegraph.

Arrival in the hotel. Hotel check-in.

06:30 Transfer to the local airport in Tashkent.

Transfer to the hotel and meet the guide at the hotel.

- Mausoleum of Khoji Doniyor known also as Saint Daniel. Khoja Donier is considered as a saint patron of Samarkand, people believe that a visit to the mausoleum can bring health and success; many visitors come here to make wishes near the almond tree. A holy spring is located at the foot of the hill of the mausoleum; people claim the water has healing and miraculous properties;

- Paper factory "Meros”  in Konigil village that produces a unique paper that can be preserved for more than and is used in craftworks;

- Carpet factory “Hudjum” to observe the process of the finest carpets weaving.

Transfer to Chimgan mountains, en-route enjoying the picturesque views of beautiful mountains and the life of local people.

- First stop near Beldersay gorge. Take a ride on chair lift going up to gorge to Kumbel peak (2400 m), where the longest Ski tracks in Uzbekistan has its start.

- Have lunch in mountain restaurants in place named "bochka" by local people.

Transfer to the hotel in Tashkent.