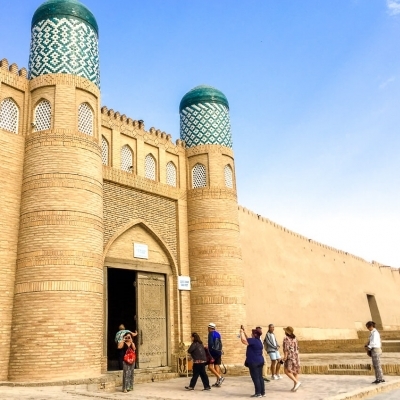 A one week itinerary to the religious landmarks have always been distinguished by their elevation and beauty.

Uzbekistan gives guests the opportunity to see this with their own eyes personally, invites them to an amazing cultural and thematic tour of the most sacred architectural monuments of Uzbekistan’s cities of Tsarist Russia and later in Tashkent, Samarkand, Bukhara, and Khiva. These cities are the treasures of Uzbekistan and represent its most known sights.

Tours to them we organize regularly and know, how to do this on A grade. Welcome to Uzbekistan!

Arrival in hotel, сheck in.

8:55 Arrival in Urgench. Meet your guide & driver in the terminal and start sightseeing tour:

- the new parish church of the Blessed Mary of the Mother of Mercy. (The opportunity to participate in the Sunday Mass at 10:00, if the day of the tour coincides);

- Visiting the street where Anna Herman was born on February 14, 1936.

Arrival to Khiva, transfer to the hotel, standard check-in

Transfer  to the hotel. Overnight.

- Chor-Minor Madrasah - Chor-Minor is known as madrasah Halif Niyazkul (in Persian “Four minarets”) was built by merchant in 1807 in Bukhara.
- Sitora-i Mokhi-khosa Palace (19 – 20th cc.). Located 4 km away from Bukhara. Once this palace life was in full swing and sealed people's fates.

14:50 Transfer to the railway station of  Bukhara.

15:50 Departure to Samarkand by train 'Afrosiyob'

17:20 Arrival. Meet with a driver and transfer to the hotel.

Transfer to the old part of Samarkand and start sightseeing program (6 hours):

16:00 Transfer to the railway station of Samarkand.

Overnight at the hotel

09:00 Meet with a guide & driver in the hotel's lobby. Start excursion in Tashkent (5-6 hrs) visiting old and new parts of it:

- The only Evangelical Lutheran Church in Central Asia, designed by the famous architect A. Benoit and built between 1895-1899.

- Holy Assumption Cathedral. Initially, the building of the cathedral was a church built in 1871 on the territory of a military hospital in honor of the great martyr and healer Panteleimon. In 1945-1950, under Bishop Hermogenes (Golubev), the building was expanded and later re-consecrated.

– Earthquake Memorial, the composition is devoted to the tragic date of earthquake in Tashkent on April 26, 1966, and is erected in the approximate place of the earthquake epicenter. Residents still come to the monument to honor those people who took a part in the reconstruction of Tashkent - the main square of Uzbekistan reflects the past, present, and future of the country;

– Khast Imam Square – a religious center of the city consisting of the Barakkhan madrasah;

– Kaffal Shashi Mausoleum and the library of Islamic Literature with the Holy Koran Book of the VII century.

– Visiting Chorsu marketplace and drive back to the new city by metro.

Continue excursion with visiting Independence Square. There are fountains standing for life energy of Uzbek people, the “Eternal flame" in honor of soldiers who died during the World War II,  the arch " Good and noble aspiration" crowned with birds of happiness and prosperity, a road "Ok Yul" (“Good way”) leading to Independence Monument and monument to Happy Mother that symbolize the hope for a great future.

One can often see the newly-weds who start a family and independent life walking through the arch of “Good and noble aspirations”, laying flowers at the monument of Happy Mother and Eternal flame.

– Theatre Square with the Opera House.

- All transfers as per program by comfortable tourist class transport including transfers to-from airports and train stations ;

Tourist tax in the hotels  per person;

- Transport for walking city tours in Khiva and Bukhara, guide and transport service for free days/time and after the standard city tours;