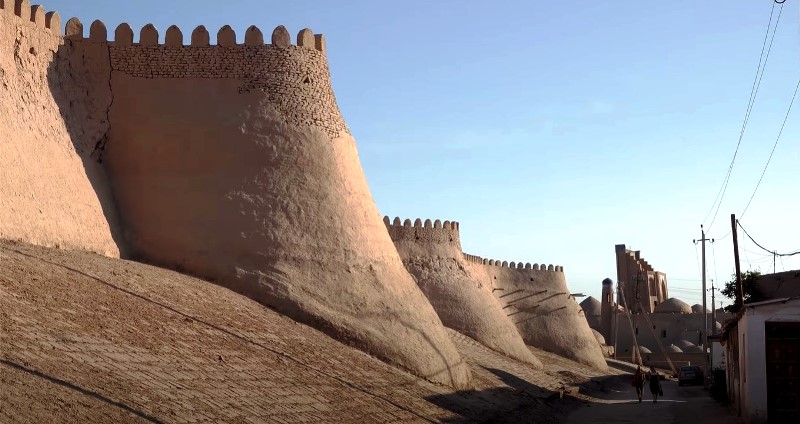 Dishan-Kala is the name of historical “outside” city of Khiva. As opposed to Ichan-Kala, Dishan-Kala is kept only ruins of gates of exterior defensive walls. The exterior walls of the city were built by order of Allah Kuli Khan in 1842 for the defense of Khiva from the Turkmen tribes.

It is known that Allakuli Khan built Dishan-Kala walls in three years; thereby he forced to work all his subordinates. More than 200 000 people were involved in the construction of the walls. The size of the walls is: length - 5650 m, height - 6.8 m, thick at the base - 4-6 pm. The city gates were part of a defense system. Thanks to preserved ruins of the gate, we can see that there used to be towers on either side of the arched passageways. There also were domed rooms, customs and prison.

The gates to public buildings and private homes have always been of great importance in Central Asia: the beautiful their décor, the greater honor has the city. It is not surprising that the gates were always decorated with colorful tiles and verses from the Koran or the texts and fragments of poems.

According to researchers, the clay for the construction was taken about two kilometers north of Khiva. Today, there is a large lake, its water is holly. The ruins of Dishan-Kala fortress are very popular with tourists, as well as it is of great interest to funs of oriental architecture. Blending with the complex of fortifications of Khiva, Dishan-Kala gives them the full completeness.