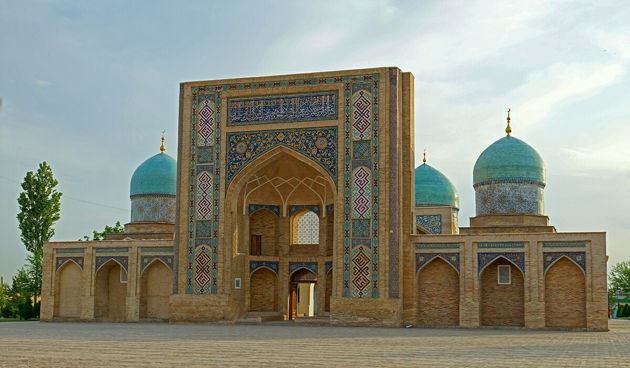 Hazrat Imam Complex is popularly known as Hast-Imam located in an old residential district of Tashkent, Sibzar. According to scientists, it was the center of the city called Shash in the middle ages. The complex of historical and architectural monuments formed around Mazar Kaffallya ash-Shashi - the first Imam and preacher of Islam in Tashkent, also he was the famous theologian and linguist, after whom the complex was named "Hazrat Imam" ("The Holy Imam").

Kaffal ash-Shashi made pilgrims to Mekka several times; he visited Damascus, Baghdad, and Hejaz. He learned the science of theologian and linguist in madrasahs of Bukhara, Samarkand and Termez. The Great theologian was revered by people, so he earned the title "the Great Imam" in the Arab world. Hazrat Imam Complex consists of architectural monuments: the Islamic Institute of al-Bukhari, Kaffalyaash-Shashi mausoleum, the building of the Spiritual Administration of Muslims of Uzbekistan, Jami Mosque and the area of Hazrat Imam.

The library of spiritual control is stored more than thirty thousand books; there are two thousand rarities among them. The Holy book – Koran is the special value for believers. Friday Mosque Jami is a master link of the vast area Hazrat Imam. The mosque was built in the tradidions of Central Asia architecture. Two colossal minarets with the height of 56 metre are adorned the entrance of the mosque.

Architectural ensemble Hazrat Imam has already been the main attraction of Uzbekistan for thousand years.