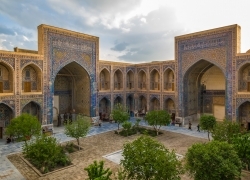 Transfer to the hotel. As Tashkent International airport is not far from the domestic airport, the transfer will not take a long time.

Transfer to the hotel. Check-in.

Resting time in the afternoon. Overnight at the hotel.

The owners demonstrate the stages of making ceramics from turning the potter’s wheel to making paints from natural ingredients, decorating the ceramics in the distinctive style, drying and firing.  Take a tour around the museum-hall of ceramic masterpieces with a unique collection of the ceramic items of Gijduvan and other regions of Uzbekistan.

- Memorial complex and maqam of Imam Al- Bukhari. Imam Al-Bukhari  was the great theologian of the East who collected and wrote down stories, many of which were made to «Shariat». His book “Al-Zhomi as Sahih” includes historical, juridical, biographical, medical, ethical sections. Memorial Imam Al-Bukhari is so honored that the visit of this holy place equates to small hadj.

Arrival in Samarkand in the afternoon.

Transfer to the hotel, check-in.