The following measures are taken against the covid-19 virus in this tour.
Read more
Tour itinerary: Tashkent
Season: All the year round
Days: 1 | Nights: 0 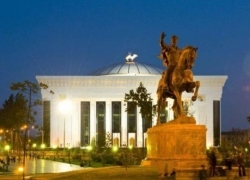 Tashkent is a beautiful green megapolis, the heart and soul of Uzbekistan, where one can see a unique combination of ancient monuments, large bazzars and modern buildings with quite interesting history. Take one day around Tashkent tour/excursion and explore the historically rich and friendly capital city.

For too curious tourists we can add extra sights to see in Tashkent - such as the Cathedral of the Sacred Heart of Jesus, Parkent with its Solar Furnace, and modern sights such as Tashkent city, Minor Mosque and Ashgabat park. These sights are worth to see if you want to embrace whole Tashkent spirit and culture.

Web resultsCatholic Cathedral of the Sacred Heart of Jesus

- Amir Timur Square, founded in 1882 and originally called Konstantinovsky Square, was renamed on August 31, 1994 after of the Amir Timur to honor the cultural and historical contribution of the great conqueror.
Around the Square there are the Museum of History of Timurids, Uzbekistan hotel, Forum Palace and famous striking clock.

- Independence Square, the main square of Uzbekistan reflects the past, present and future of the country. There are fountains standing for life energy of Uzbek people, the Cabinet and the Senate, the “Eternal flame" in honor of soldiers who died during the Second World War.
- Earthquake Memorial, the composition is devoted to the tragic date of earthquake in Tashkent on April 26, 1966, and is erected in the approximate place of earthquake epicenter. Residents still come to the monument to honor those people who took a part in the reconstruction of Tashkent;

- Chorsu bazaar – the ancient bazaar of Tashkent. “Chorsu” means “four waters”, symbolically meaning the conjunction of four major parts of old city in bazaar where people come for trades. The bazaar beautiful blue dome, built in traditional style after the Tashkent earthquake, is often depicted in post cards and international magazines and became one of the major sights of interest both for locals and guests – one can see oriental tiled bazaar from different souvenir shops with ceramics, handicraft works, carpets and jewelry, the whole pavilion full of delirious fruits to the finest textiles and colorful fabrics.

- Tashkent Metro (the first line was launched in 1977) with beautiful train stations each decorated in thematic style with traditional ornaments and  special lightning.

Transfer back to the hotel. End of the tour.

- Transport for all tour time;

- Single entry tickets to the sites as per program;

- Fees for the use of professional photo/video;

- Meals, personal expenses and other services not specified under “Tour Price Includes”.