The following measures are taken against the covid-19 virus in this tour.
Read more
Tour itinerary: Samarkand – Shakhrisabz – Samarkand
Season: all the year round
Days: 1 | Nights: 0 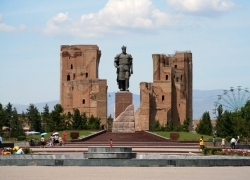 One day tour to Shakhrisabz: day itinerary to one of the oldest cities in Central Asia that is inscribed in the UNESCO World Heritage List. According to historical sources ancient settlements existed here 1700 BC. The city is world-famous as a capital of Temurids dynasty and homeland of Temur the Great.

Nowadays, Shakhrisabz is under threat of destruction - Ak-Saroy palace doesnt feel so well, and slowly collapsing. Dishes, served in Shakhrisabz, have a certain taste of mixed up local spices, esp red pepper. But still, Ak-Saroy and the garden have a lot to impress with. Just need to book our one-day tour and you ready to go!

08:00 Meet up with our driver in chosen Samarkand hotel's lobby and transfer to Shakhrisabz town (90км).

- Ak Saray Palace (“White Palace”), the ruins of the summer palace of Tamerlane. During his reign, Shahrisabz was flourishing and experienced the significant patronage of the great conqueror. The palace was constructed and decorated by deported from conquered Khorezm skillful builders, masters and artisans. Some parts of the gate tower have survived to the present day. Among the well-preserved fragments of blue, white and gold mosaics above the entry of  Ak-Saray there are big letters saying: "If you are going to challenge our power – look at our buildings!"

- Visit Kok Gumbaz, so-called “House of Meditation” and Ensemble Dorus-Tilyavat built by Ulugbek in honor of his father Shahrukh and mausoleum Gumbazi-Seyidon of XVI century where the descendants of Ulugbek are buried.

After the excursion, we will transfer back to Samarkand. The end of the tour.

- Comfortable vehicles with a/c during the route Samarkand-Shahrisabz-Samarkand;

- All entrance fees to the monuments and museums as specified in the program;