The following measures are taken against the covid-19 virus in this tour.
Read more
Tour itinerary: Uzbekistan – Turkmenistan
Season: all the year around
Days: 11 | Nights: 10 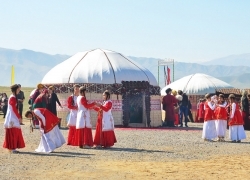 Take the tour to explore Uzbekistan and Turkmenistan and enjoy warm hospitality of local people.

10:00  Transfer to Samarkand, en- route visiting famous Gijduvan pottery workshop where visitors are welcome for a tour around the workshop and observe the process of ceramic making and painting.

By request, a master-class of painting ceramics, suzani embroidery and traditional bread baking. Continue to Bukhara.

Transfer to the Mary airport.

- Anau mosque ruins of 15 Century  and Anau culture remains of the Bronze Age in the suburban area of Ashgabat;

- Ahalteke horse stables, where you will have an opportunity to see the most beautiful horses in the world. Archeologists and historians proved that horses were handled on the territory of Turkmenistan minimum five thousand years ago. The specialists note that foothill lands of Kopetdag made favorable ecological conditions for the birth of strapping and wanton horses.

- In the afternoon transfer to Darwaza crater and change from the asphalt road to the Karakum desert track, continue 10 km deep inside. In 1971 geologists accidentally found an underground cavern filled with natural gas. To avoid poisonous gas discharge, it was decided to burn the gas. Geologists hoped the fire would go out in a few days but it has been burning ever since. Locals have named the cavern The Gate - Darwaza. The views are impressive, especially in sunset and night when the mild sunlight and burning crater evoke incredible and ambiguous feelings.

Afternoon transfer to Turkmen – Uzbek Border post Khojeyli. Border passing formalities. Meet the driver at Uzbek side of the border. Transfer to Nukus.

The founder of the museum, Igor Savitsky devoted his life to piece-by-piece collecting of finest works of modern artists of Uzbekistan and Russian avant-gardists. In 70 s it was quite risky to become anti-Soviet propagandist. During perestroika and first years since Uzbekistan independence, the museum earned the world recognition and deserved rightfully the must see sight status in Central Asia.

-Ayaz-kala and Toprak-kala, the fortresses of Kushan period of Ancient Khorezm that used to be mighty border forts protecting the residents from raids of nomadic tribes.  The forts were built in ~4-7th century BCE, during the ages when Khorezm achieved its independence. The fortresses are located on the hills quite close to each other and visitors are welcome to have a short overview tour in the monumental forts that currently are drowning in sands.

Start WALKING excursion in the historical part of Khiva – Ichan-kala (translated as “Inner town”). Ichan-kala - the largest Museum in the open air in Central Asia consisting of :

-Amir Timur Square, founded in 1882 and originally called Konstantinovsky Square, was renamed in 1994 after of the Amir Temur to honor the cultural and historical contribution of the great conqueror.

- Tashkent chimes, one of major symbols of Tashkent, were brought from defeated Koenisberg in 1945 as a sign of the great victory and eternal glory of patriots who fought  in World War II.

- Independence Square , the main square of Uzbekistan reflects the past, present and future of the country. There are fountains , the “Eternal flame" in honor of soldiers who died during the Second World War, arch " Good and noble aspiration" crowned with birds of happiness and prosperity, road "Ok Yul" (“Good way”) leading to Independence Monument and a monument to Happy Mother that symbolize the hope for a great future.

- Khast Imam Square – a religious center of the city consisting of the Barakkhan madrasah; Kaffal Shashi Mausoleum and the library of Islamic Literature with the Holy Koran Book of the VII century ( original Quran Othman). Khast Imam is one of the most significant spiritual centers in Central Asia and attracts the pilgrims and visitors all over the world.

Tashkent Metro (the first line was launched in 1977) with beautiful train stations each decorated in thematic style with traditional ornaments and special lightning.

- All transfers as per program by comfortable tourist class/SUV transport as per road conditions including transfers to-from train stations /borders;

- E-visa to Uzbekistan, migration tax 10+4 USD per person and Turkmenistan tourist visa from 85+4 USD  per person(subject to change; nationality dependent);

- Uzbekistan: Transport for walking tours in Khiva and  Bukhara; guide/transport service for free time after the standard city tours;

- Meals: lunches and dinners except those specified in  the included section ;