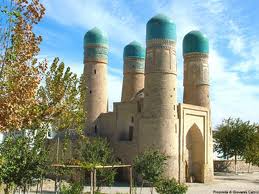 Bukhara is located in the south-western part of Uzbekistan, about 200 km from Samarkand. Bukhara - one of the oldest cities of Central Asia, "Star of the Islamic world" and "the holy city of Central Asia," Bukhara got  its titles not in vain - in the Middle Ages there were 360 mosques and 80 madrassahs. An old legend tells that the light of grace descends on all Muslim cities from the heavens, and only over Bukhara it rises. Founded 2500 years ago by a Persian prince Siyavush as a king citadel, the city began to grow rapidly due to its strategic location at the crossroads of trade routes, leading to Merv, Urgench, Kabul and Samarkand. The city assumed the modern aspect during the dynasties of the Sheibanids and the Ashtarkhanids (XVI-XVII centuries). It was the time, when most amazing mosques and madrassahs, caravanserais and baths, city walls and gates, as well as large architectural ensembles and tombs were built. This amazing city did not go beyond its fortress, built in the XVI century, and instead a huge number of religious buildings and bazaars, where one could buy completely everything, without exaggeration. Walking around Old Bukhara, founded in the first centuries BC., you see the monuments of ancient civilizations. The walls of old citadel, more than 140 architectural monuments of the Muslim epoch, amazing districts and narrow streets of the old town remained till these days.

The Pearl of the City is a small mausoleum of the Samanids, recently celebrated its millennium (Bukhara was the capital of this dynasty). At a distance, this immensely well-built tomb looks like a carved golden casket, topped by a low dome. At close quarters the eyes of many tourists “are popping out” with astonishment -  the whole mausoleum is built of ordinary baked bricks, but the skill with which the brickwork is done and fanciful carvings (brick by brick!) creates such a play of light and shadow, that the whole surface of the Mausoleum is filled with air and perfect grace. In such a technique another architectural symbol of Bukhara - architectural complex Poi Kalyan ("pillar of greatness") is executed. It consists of the Great Minaret Kalyan (1127, is considered one of the highest in Asia), Kalyan mosque and two madrassahs - Miri-Arab (1536 ) and Emir Alimhan (XX century). The spectacular panorama of ancient Bukhara is opened from the circular gallery near the lantern of the minaret.
The architectural monuments of world significance include the mausoleum of Chashma-Agrob (Chashma-Ayub, 1380), Buyan- Kuli -Khan (1358 ) mausoleum with a beautiful terra-cotta walls, mausoleum of Sayfiddin Bokharzi (Sayf al-Din, XIII-XIV centuries. ), the summer residence of Bukhara emirs – the urban citadel Arc (XV-XIX cc.), the religious ensemble Gaukushon at the mosque Khoja Kalyan, the minaret and madrassah of Khodja-Gaukushon (1570), and the arcades Tak- and-Telpak Furushon (XVI century ), a unique mosque Magoki-Attori (1546-1547), the palace mosque Jami (XIX century), the mosques Balyand (XIV century), and Khodja- Zainuddin (1555), the mosque and the madrassah Bola-Khauz (XVIII century) the madrassah of Ulugbek (XI-XVI centuries - the only building of the period of his rule), Abdulaziz-Khan madrassah (1652) is opposite the madrassah of Ulugbek, the madrassah Modari -Khan (1566-1567) and Abdullah -Khan (1558-1590,  together compose the so-called Kosh-Madrassah - the "double madrassah"), the madrassah Chor-Minor (1807) and the country palace of the last emir of the country - Mokhi-Khossa (XIX-XX centuries, 4 km. north of Bukhara). 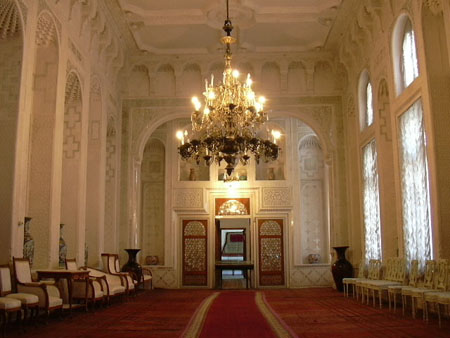 Lyabi-Hauz – the center of another magnificent monument of Bukhara. "Khauz" – is a pond, and probably, there is no need to talk about the ponds, which played the role in the life of this city, located on the edge of the fervent wastes. And Lyabi -Khauz – the rectangular pool with the cut corners, framed with three monumental madrassahs of the XVI-XVII centuries, was once a center of social life in the city. Madrassah Kukeldash (1568-1569) and khanaka Nadir Divanbegi (Nodir Devon -Begi, 1622) make a single ensemble, in which the central element is Lyabi-Khauz. Perfectly remained the amazing conglomeration of the domes at the market Toki -Zargaron and many other great monuments. And, of course, no one passes by the busy bazaars of Bukhara.
Many historical monuments are centralized around Bukhara, they are Varakhsha settlement with the palace (V-IX centuries) and madrassah of Ibrahim Okhunda (1884), the suburban mosque Namozgokh (XII-XVI centuries) southward the city, the haven for wandering dervishes -monks - khanaka Faizabad (1598-1599), the tomb of the sheikhs of the order "nakshbandiya" - Chor-Bakr necropolis (XVI century, the burial place of the family of Sheikh Zhubayri (1560-1563)) in the village Sumitan, the mausoleum of the patron saint of Bukhara and the pir of Timur Bakhauddin Nakshbandi (the founder of the Sufi Order "Nakshbandiy, 1560-1563), the tomb of Khazrat Said Amir Kulol, the teacher of Bakhauddin Nakshbandi - in the village of Kasri Arifon and the ruins of the caravanserai Rabati- Malik in Kermin.

Bukhara captures imagination and attracts many history and culture passionate visitors like our dear friend, an outstanding photographer, travel blogger and just a great person Wilbur.

“I hate feeling at home when I am abroad” is his motto to happy wandering around the world highlighting the unique beauty and authentic features of more than 70 countries he visited.

We are proud to be a part of Wilbur inspirational insight journey around Central Asia and will be glad to welcome you, Wilbur and more and more guests in Uzbekistan.