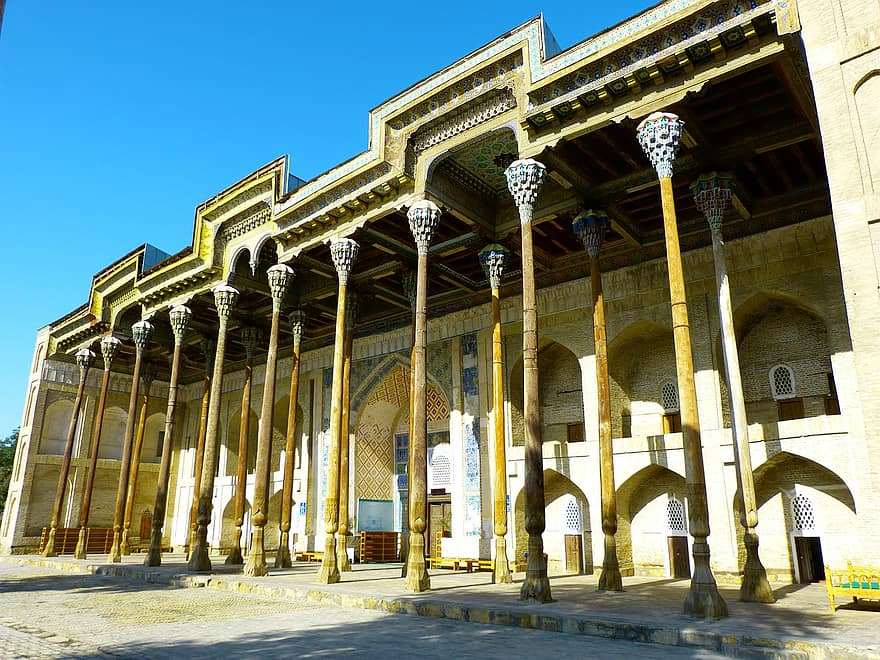 Bolo-House is an architectural monument, situated at the Square Registan, which consists of mosque, minaret and house, was built in 1712. It is known also as the Mosque of forty columns. Until 1917 Bolo-House mosque was built as the emir mosque, but later it has become common Friday Mosque, where still true believers come to the noon prayer. According to the legend, the mosque was built in honor of Bukhara governor Abu-Fayud Khan, the other version is that it was originally built by emir Shah-Murad as the total mosque.

The mosque was built in style of XIX-XX centuries. At the beginning of XX century the open aivan was attached to the mosque, which is a real work of the Uzbek national decorative art. Wooden columns, installed in two rows, are the support for aivan. Gorgeous painting amazes by its beauty, which decorates balconies with arched ceilings and ceiling aivan. In 1917 in front of the mosque, near the pool, was built a small minaret, whose walls are decorated with patterned brickwork, the distinguished feature of this mosque is the small size and proportion. Bolo-House has winter and summer mosque. The winter mosque is the hall with four columns, which has several inputs. The summer mosque is aivan, surrounding the winter hall of the mosque.

Despite the Mosque Bolo-House was built relatively later than other architectural monuments; it can rightly be considered one of the most beautiful and luxurious sights in Bukhara.