The following measures are taken against the covid-19 virus in this tour.
Read more
Tour itinerary: Uzbekistan – Turkmenistan
Season: all the year around
Days: 14 | Nights: 13 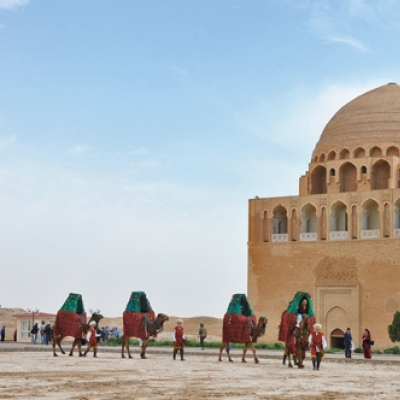 14-day trip to ancient cities of Uzbekistan and Turkmenistan is the best tour for travelers interested in the culture and history. Enjoy your visit to the pearls of Central Asia - magnificent Samarkand, sacred Bukhara, open-air museum Khiva, beautiful Kunya Urgench and white marble Ashgabat.

-          Mausoleum of Khoji Doniyor known also as Saint Daniel.Khoja Donier is considered as a saint patron of Samarkand, people believe that a visit to the mausoleum can bring health and success; many visitors come here to make wishes near the almond tree. A holy spring is located at the foot of the hill of the mausoleum; people claim the water has healing and miraculous properties.

-          Paper factory ”Meros”  in Konigil village that produces unique paper that can be preserved for more than and is used in craftworks,

-          Ak Saray Palace (“White Palace”), the ruins of the summer palace of Tamerlane. The palace was constructed and decorated by deported from conquered Khorezm skillful builders, masters and artisans. Some parts of the gate tower survived to the present day.

-          Mausoleum of Dorus-Saodat ("The Place of Power", XIV century) contains the tomb of Eldest and favourite Tamerlane’s son Jahongir.

-          Mausoleum Gumbazi-Seyidon of XVI century where the descendants of Ulugbek are buried.

Resting time in the afternoon/evening. Overnight at the hotel.
Day 8
Khiva

09:00 Start WALKING excursion in the historical part of Khiva – Ichan-kala (translated as “Inner town”). Ichan-kala - the largest Museum in the open air in Central Asia consisting from the next monuments:

-          Ayaz-kala and Toprak-kala, the fortresses of Kushan period of Ancient Khorezm that used to be mighty border forts protecting the residents from raids of nomadic tribes.  The forts were built in ~4-7th century BCE, during the ages when Khorezm achieved its independence. The fortresses are located on the hills quite close to each other and visitors are welcome to have a short overview tour in the monumental forts drown in sands.

The founder of the museum, Igor Savitsky devoted his life to piece-by-piece collecting of finest works of modern artists of Uzbekistan and Russian avant-gardists. In 70 s it was quite risky to become anti-Soviet propagandist. During perestroika and first years since Uzbekistan independence, the museum earned the world recognition and deserved rightfully the must see sight status in Central Asia.

Resting time in the afternoon/evening. Overnight at the hotel

-          Drive to Muynak via beautiful Red Canions with beautiful and unusual Martian landscape. Arrival in Muynak city that used to be one of the richest city in the delta of Amu-darya,” the gates to Uzbekistan from the sea”. Nowadays there is only cemetery of Dead Sea.

-          Visit Mizdakhan necropolis on the way back to Nukus (about 20 km from Nukus), an ancient cemetery, and located next to the remains of the Gyaur-Kala fortresss (4-3 Century BC).

-          Gaur Kala (translated as the fortress of pagans) was a Zoroastrian town with citadel, the fire altar and a large cemetery nearby. Even after Arab invasion and Islam expansion, the town was inhabited until 14 Century and people continued to bury their relatives in Mizdakhan as they believed the place was a sacred place.

08:30 Meet the driver at the lobby .Transfer to Turkmen – Uzbek Border post Khojeyli.

Pass the border. Border passing formalities (passport and visa control might take 1 to 2 hrs depending on the customs formalities). Meet the guide and driver at Turkmen side of the border. Transfer to Kunya – Urgench.

-          Mausoleum Arslan II (the oldest building in the city - date of its bookmark is roughly estimated by XI century).

Transfer to the Ashgabat airport.