7 day group tour on May holidays 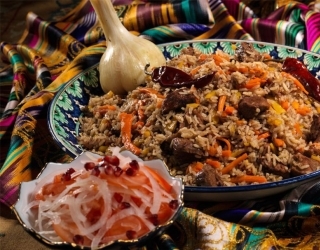 This Spring time group tour in Uzbekistan 2020-2021 is a great opportunity to observe the Great Four - main cities of Uzbekistan, true hearts of ancient Uzbek culture and spirit. We will provide excursion to the most known sights of Samarkand, Khiva and Tashked during this tour. You will discover a whole new world of glittering sky blue mosaics, sandy squares and mausoleums keeping their gloss and greatness. You will try several different dishes, go above and beyond

Welcome to Uzbekistan in May tour! Welcome to Central Asia!

Come out of the terminal and meet the staff holding a sign “ANUR TOUR” or with your name on it. Transfer to the hotel. As Tashkent airport not far from the city center, transfer will not take long time (20 – 40 minutes depend on from the hotel).

We can arrange your early check-in for additional charge.

- Theatre Square with the Opera House;

-  Independence Square , the main square of Uzbekistan reflects the past, present and future of the country.

There are fountains standing for life energy of Uzbek people, the Cabinet and the Senate, the “Eternal flame" in honor of soldiers who died during the Second World War, arch " Good and noble aspiration" crowned with birds of happiness and prosperity, road "Ok Yul" (“Good way”) leading to Independence Monument and a monument to Happy Mother that symbolize the hope for a great future.
One can often see the newlyweds who start a family and independent life walking through the arch of “Good and noble aspirations”, laying flowers at the monument of Happy mother and “Eternal flame”.

-  Khast Imam Square – a religious center of the city consisting of the Barakkhan madrasah;

10:10 Arrival in Samarkand. Meet up with our guide and driver and start excursion:

– Shahi Zinda Necropolis – unique complex of Mausoleums formed by standing on both sides of the cenotaph (an imaginary grave) belonging to the Muslim person named Saint Abbas ibn-Kussam;

Afternoon transfer to Bukhara, en- route visiting famous Gijduvan pottery workshop where visitors are welcome for a tour around the workshop and observe the process of ceramic making and painting.

Meet a guide and start your walking excursion:

– Caravanserai Saifuddin (the Center of Handicraft Development of Bukhara);

– There are three trading places or so-called covered bazaars: Toki Sarrofon, Toki Telpak Furushon, and Toki Zargaron preserved from the XVI century. These bazaars were the centers for trade of silk, jewelry and even for money exchange. Today as well, one can enjoy and purchase different souvenirs of a wide range, from small souvenir magnets to the famous Bukhara carpets;

– Visit Ulughbek and Abdulazizkhan Madrassas or so-called Kosh (pare) madrassas standing in front of each other with a distinctive style of facade ornamental decoration;

– Poi Kalon Square with Kalon Minaret and Mosque, Mir Arab Madrassa – the heart of Bukhara, a monumental complex impressing the imagination of every visitor;

– Ark Fortress – the oldest citadel dating back to I century BC where one can feel the history of the great fortress covered in beautiful legends and myths.

Optionally can be added by request: a quick visit to Samanids mausoleum (IX century), a monument of early medieval architecture with a local guide.

Kyzylkum desert - Kyzylkum (from Turkic means «red sand») – is a sandy desert between the rivers Amudarya and Syrdarya in Central Asia. Its area is 300 thousand sq. km. On the north-west the desert is limited by hollow of Aral Sea, on the north-east by Syrdarya and on the south-west is limited by Amudarya. In ancient time, Great Silk Road passed through the Kyzylkum desert. Thanks to it, such famous cities as Bukhara, Samarkand and Khiva prospered. People of different professions worked here: sellers, interpreters, guarder of caravans, tax collectors. It is very strange but there was hectic life in the desert.

23:55 Arrival in Tashkent. Meet up with the driver and transfer to your hotel. check-in.

Departure from Tashkent via morning/day flight.

- All the transfers as listed in the program.

- Entry tickets to the mausoleum and other sights as listed in the program.

- Children upon 2 years old do not get extra bed or extra seat in trains.

- We attach an English - speaking tour leader for groups of 10 persons or more.

- Fees for using a professional camera at the mausoleums/museums.

- Luggage transfer in the airport and hotels.

- A service from our guides and drivers in your free time.

- Other personal costs and spending s.