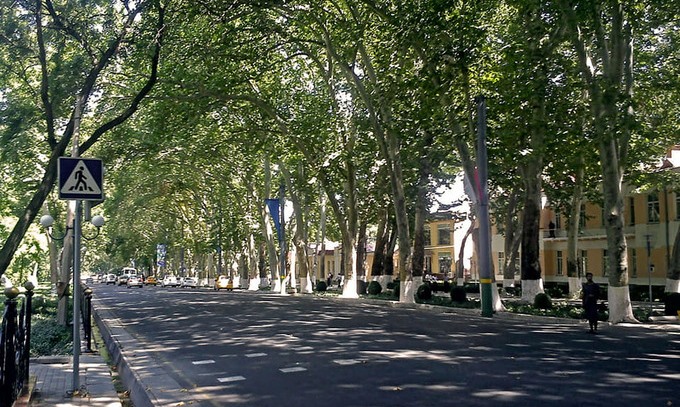 University Boulevard is located in the centre of Samarkand, close to the hotels "Afrasiab" and "President". Samarkand State University is the largest and most prestigious of the six universities of the city, located in one of the oldest buildings of the street, which was founded eighty years ago. There are a lot of new teaching university buildings around the boulevard. There is also the building of Samarkand institute of foreign languages, where the future guides and interpreters assimilate the experience in their profession.

University Boulevard was formed in 1970 in the XIX century, after the capture of Samarkand by Russia. It was a boundary between the old and new part of the city. There are the city’s administrative and Bank centres, which represent impressive buildings of brick. Under the plane trees and venerable oaks, you can see girls and boys with books in their hands. Only experienced architects could combine European features and local traditions. Buildings of this style remind the first royal governor of Samarkand region. Now there is the city administration.

Today, any Capital Avenue can envy the University Boulevard with a length of 128 meters. University Boulevard is not only educational and scientific center of Samarkand, but also the personification of a successful future of the country. A lot of students were graduated by Samarkand Institute. Now they work at their profession, introducing tourists and visitors with a fabulous city of Samarkand.