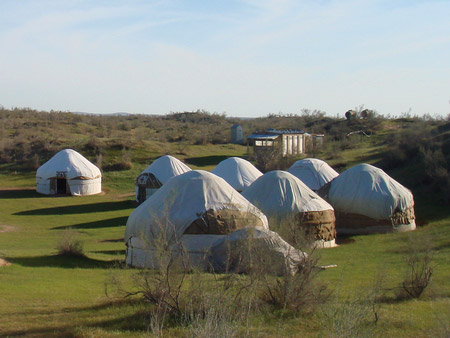 The main type of accommodation for nomadic Uzbek people was yurta up to XIX century. After changing to settled life (end of XIX c.) they began to build wattle and daub houses. For this time yurta used only by stock keepers for summer period.

At that time each young man going to marry had to have his own yurta. According to customs of kipchaks and karluks the man without yurta couldn’t marry. Yurta for newlywed was built from white felt. But if the groom didn’t have enough money, they would use common white cloth.

Uzbek yurta doesn’t have great differences from Turkmen, Kirgiz, Kazakh and Karakalpak yurts. The main difference is in decoration and other unimportant details. So we can say that the culture and everyday life of these peoples was closely connected.

Prefabricated grating was the main structure of yurta. The builders used bent uks (sticks) for covering, which was connected with woolen ropes. Bright and long lace around the yurta was the main decoration of construction. The entrance was decorated by wing door calling “erganak”.

There’s unique yurt camp Nurata on the territory of Uzbekistan and you can visit it during your tour to Uzbekistan.Try to live for some time in Uzbek yurta, know more about its construction and feel steppe man. The camp is situated 60 km far from Nurata, near beauty Lake Aydarkul.