Caravanserai is an original public building in the Middle East and Central Asia, usually serves as shelter for travelers in cities and populated areas. There were one and two storey caravanserais.

Caravanserai is of two types: open and closed. Closed form is a rectangular building with an open courtyard in the middle of which was a well. There were rooms for living and warehouse for the goods. They were widespread in IX-XVIII centuries, because this time caravan trade was especially developed.

The term “caravansary” is of Persian origin. "Caravan" in Farsi means a group of traveling people; "serai" means a restroom. Caravanserai served not only as a building for temporary accommodation for travelers but there were also learned the latest commercial and political news, met with merchants from other cities and countries to conclude trade deals.

Today caravanserai is a unique architectural monument, appeared on the border between Europe and Asia. Despite the fact that new buildings caravanserais were not built lately, it still remains the most important architectural part of the historic city center. 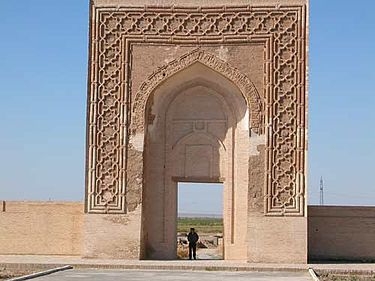 There’s medieval caravanserai Rabat-Malik on the territory of modern Uzbekistan. It’s situated near Navoi city. Travellers had been going from Samarkand to Bukhara could stay there for a night. The building is dated to XI century and was monumental palace complex.

It became possible to know about planning of the caravanserai only after archeological excavations. There were apartments for travellers, bathhouse, mosque and stables. According to the square of the stables, not less than 150 horses could stay there. The entrance portal was also majestic – its height was 18 meters.

Not far from the main portal there’s sardoba, underground water storage. Water was coming from the Zarafshan river and it was enough for all guests’ needs.

Nowadays there’re only ruins of ex-palace complex and the part of south facade with tower. The entrance portal has terra-cotta sign, telling us that the complex was built by “Sultan of the world and with the help of God became like Paradise”.

Though nowadays portal leads only to boundless Bukhara steppe, complex attracts many tourists. Our tours to Uzbekistan give you opportunity to visit caravanserai Rabat-Malik.