The construction of Uzbek houses formed on the weather and relief of the region. That’s why each city of Uzbekistan has its own traditions and even school of architecture. Because of frequent rain, snow and also earthquake people build houses with double wooden frame in the mountains. But in the cities there were houses with single frame.

In the end of XIX century houses were built without foundation. Saman (chopped straw) was the only foundation of the houses. The main material for walls was clay, mixed with straw and other ingredients.

The plan of the houses

The yards in rich houses were double: internal and external. Women and children lived in courtyard; the external yard was used for guests. There were the most luxurious rooms. The plan of the house depended on family members, but the main rooms were kitchen, living room, hallway, some rooms, veranda and utility rooms.

In populous cities hallway often was on the first floor – balachan. The entrance door was often low – it made people to bend when they come in and out of the house. This little bow helped to show respect to the house, its owner and traditions.

For summer and winter rest 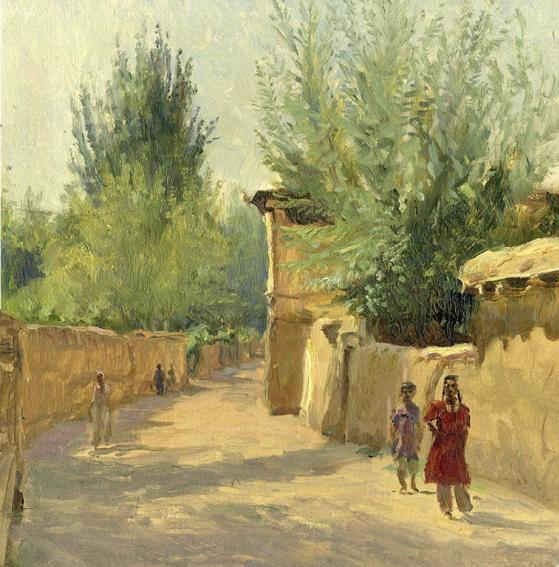 Verandas helped to escape the heat. It was the place for summer rest. In winter time people lived in inner rooms. Verandas in Khorezm were tall and wide. There was also small pool with elm-trees (gudjim) near the house. Such kind of trees has an ability to cool the air. That’s why Khorezm often called as a country of elm-trees (gudjim).

In winter time the house was heated by sandal – it was used for warming hands and legs. Sandal is a small deepening with constantly smoldering coals under the table. To keep people warm a big quilt was put around and up the table. There were kurpachi (small quilts) around the table for sitting.

Uzbeks always tried to keep their yard and house clean and beauty from ancient time. And each family tried to decorate the house: they made beautiful carved gates, doors and put Iran or Turkmen carpets in the rooms.