Katta Langar: where time has no power 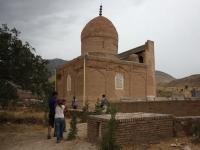 The mountainous village Katta Langar is situated on the foot of the Zarafshan spine, 70 kilometers from Shahrisyabz. It is unique place with its picturesque nature landscapes. The view of this place gives a person pacification and calmness.

Picturesque views are very attractive for tourists but also they are attracted by mosque and mausoleum of sufi Mahammad Sadik. More than half century ago he started to preach the doctrine, to meet his pupils and followers in this village.

The mosque was built in the start of XVI century. Many years there were only praying hall and extra rooms. The building process of the mosque is unique and tourists can know many legends about it.

This is one of them: when the construction was almost finished, workers had found out that they had lack of material to build the last column. The mosque was finished owing to sufi Mahammad Sadic who turned cotton bush into the tree.

Mausoleum of Muhammad Sadik is located on the top of the other mountain (XV century). The construction of mausoleum is simple as Muhammad Sadik asked to make. If to bypass the mausoleum three times any wish will come true.

Don’t neglect an opportunity to do this during the tour to Uzbekistan. The spike of the mausoleum is decorated with four balls. It is the symbol of great sufi. The way to mausoleum is very difficult and it helps pilgrims to think about life and other eternal things.