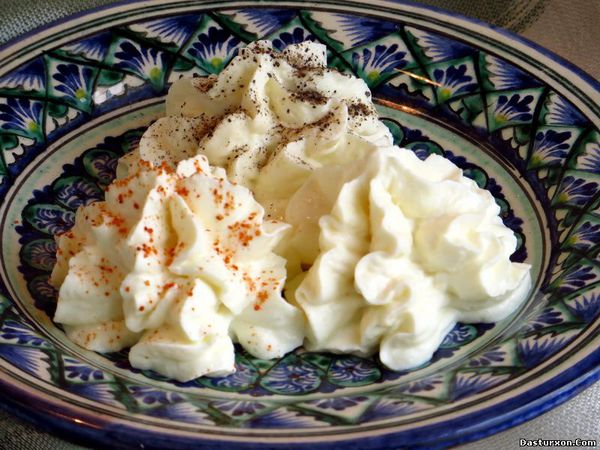 Milk in Uzbekistan is the starting ingredient for producing many different products. It’s kaymak, katyk, suzma, kurt and interesting drinks as ayran, chalop, goudja and even soups. The methods of processing of milk go back to remote ages and each Uzbek dish holds a great historical logic and wisdom.  Otherwise how we can explain that milk wasn’t spoiled at the temperature of 40-50C.

Kaymak is the whipped fatty part of milk that can easily substitute butter. Milk in Uzbekistan is very fat (5.2% fatness) and that’s why it takes only to boil milk and skim fat to get kaymak. The product is often spread on bread or added to different dishes and delicate sauces and dressings.

Katyk is sour milk, the nearest relative of clabber. It’s produced from skimmed milk where we add the starter. After 6-8 hours the most delicious drink appears. There’re dozens of katyn-based dishes and drinks in Uzbekistan and everybody liked it.

Suzma is another transformation of milk made from katyk by removing whey. It serves as a base for many drinks, soupsm snacks and salads. It’s usually flavored with salt, pepper and herbs. Suzma is an excellent fat-splitter and that’s why it’s mainly served together with solid and fat food to stimulate bowel movement.

The most popular and favorite dairy product in Uzbekistan is kurt or white balls made from dry milk. Usually kurt is flavored with pepper, spices and herbs. It’s made from suzma from what is making small and big balls and is put in the open air for 3-5 days. Even in the most desperate heat you need no fridge to store these white balls. Kurt is a dainty by itself but it can serve as a base for many dishes.