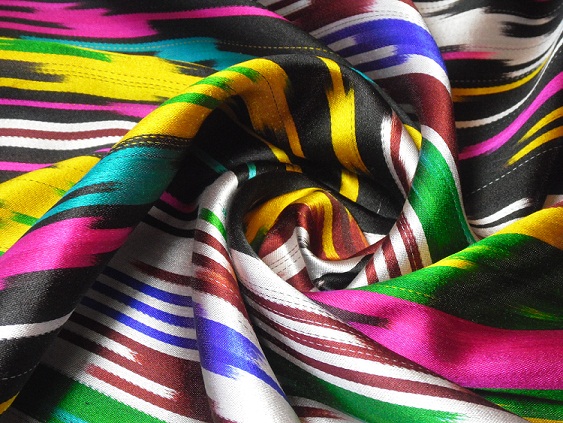 Khan-atlas is traditional uzbek fabric, made from dense silk. The fabric has interesting complex netting. And it’s coloring made by natural dyes. There’re a lot of legends about khan-atlas and there’s one of them:

Many centuries ago one of Marghilan rulers fell in love with beautiful daughter of a poor artist and wanted to marry her at any cost. Having heard this news, the father of the young beauty was saddened. So he came to the palace and asked the ruler not to marry his daughter. Khan didn’t agree and laid down one condition.

If the artist could create something beautiful and unusual till the next morning, the Khan would forget about his daughter. “It’s impossible” – thought the artists and came out of palace. Saddened, hesat near arik (small channel). At once he saw reflection of cloudsin the water and this reflection was colored with all the colours of rainbow.

He thanked Allah for wonderful idea and went home immediately. Arriving home, he wove an unusually beautiful fabric - cool as a mountain air,light as a feather, reflecting all the colors of the rainbow. The artist pleased with the work came to the palace the next morning. When Khan saw beautiful and so light fabric, he was astonished at its beauty. Hence the name "khan-atlas" (Khan silk), and artist’s daughter was married the khan’s son.

So khan-atlas became one of the symbols not only of Marghilan but Uzbekistan. There are nature of the Uzbek people and its national artistic taste in the pattern of this fabric. A color palette and texture of silk symbolize kindness, energy and optimism.