The peculiarity of clothes of local nations has always been determined by climatic, social and tribal traditions. As far back as 19th century clothing (gowns, dresses, and shirts) continued keeping the archaic features: wide, long, whole-cut, it freely fell down hiding the shapes of the human body. The clothes were unified: for winter and summer, for men, women and children, they were close and design.

The traditional national men's costume consists of a warm quilted robe - chapan tied with a scarf or scarves, headgear tyubeteika, and boots made of fine leather. Men wore shirts of straight design, inner and outer robes. A robe might be light or warm, quilted on wadding. 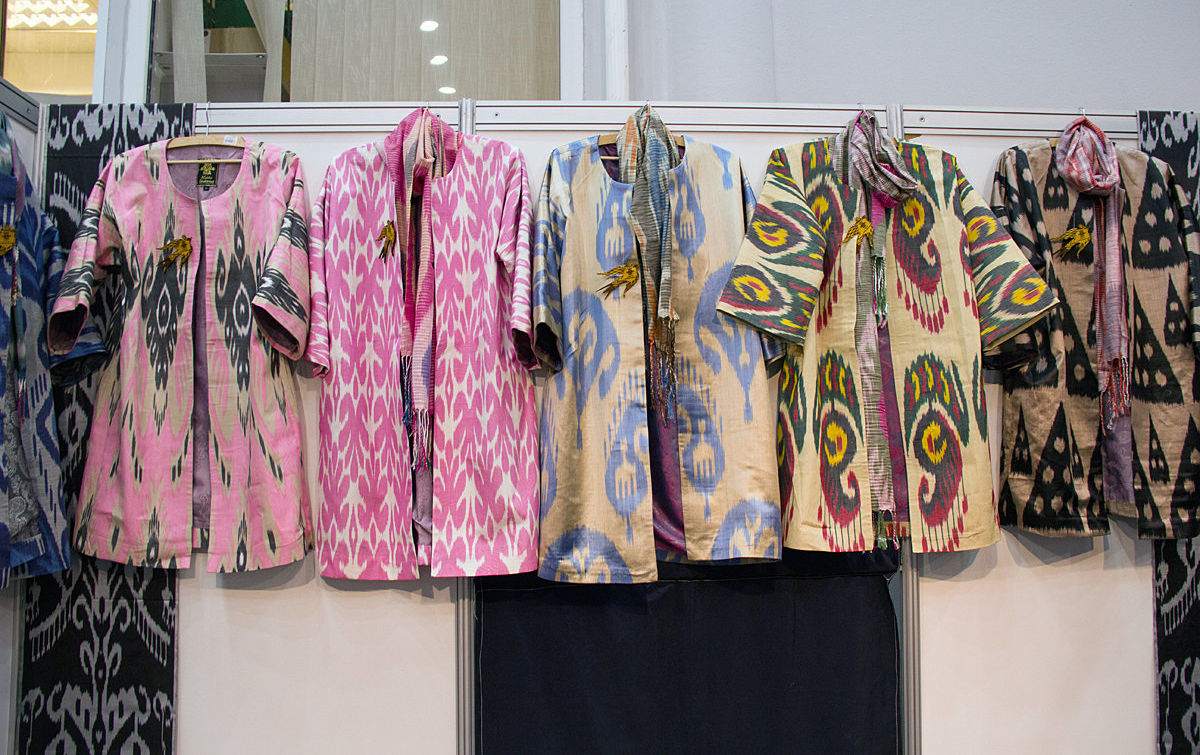 On each side of the robe there were cuts for convenience of walking and sitting on the floor. Robe - chapan usually was tied with a scarf or scarves.

Holiday national costume differs from the every day one by its beauty of used fabrics, embroidery, etc. Women's national costume consists of robe, functional dress of simple cut of khan-atlas, and lightwear trousers. Women's head dressing consisted of three main elements: the cap, scarf and turban. Holiday women's costume differs from the everyday one by its good quality and fanciness of fabrics. Child's clothes repeated the shapes of adults' clothes. Along with common features, the clothes of each region or tribe had its uniqueness expressed in the fabric, shape, etc.wide thin knickers narrowed at the bottom.

Lately, the Uzbek clothes have undergone drastic changes under the influence of European culture, so everywhere you can find people dressed on extremely modern lines. However, the well-known Uzbek embroidery and embroidered clothes, metal works and precious stones, traditional head dresses and carpets are still considerably more popular than European innovations.

Tyubeteika has always been one of the most popular and widespread types of applied art of Uzbekistan. It looks like a hard or soft cap on the lining; became a part of the Uzbek national costume, came into the life and traditions of Uzbek people. This hat (from the Turkic "Tube" - top) is not only the national head-dress among the Uzbeks, but also among other Central Asian nations. 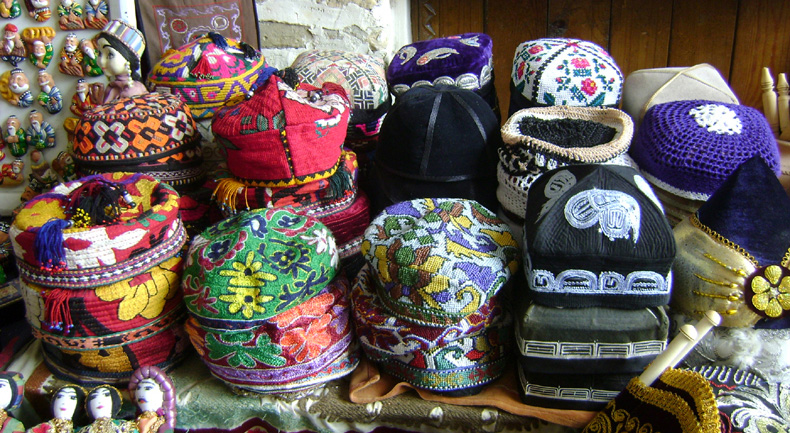 They are classified by types: men, women, children, for old people. Old women do not wear it. Child's tyubeteikas (kulohcha, kalpakcha, duppi, kulupush) are colorful fabrics, fluffiness of tassels and beads, embroidery, spangles and lots of charms. The most common forms of Uzbek tyubeteikas are- square, slightly conical. Tyubeteikas are made of two or more layers of fabric quilted and fixed with a silk or cotton thread. The ready one is embroidered with a silk thread, gold or silver cantle. Women were skilled in the art of embroidery of tyubeteykas.

The most common patterns of embroidery include flower motif, almond-shaped motif "bodom" – a symbol of life and fertility. "Ilon izi" (trail snakes) is a widespread pattern in the ornament of  tyubeteikas, it acts as a talisman. Geometric patterns were also popular.

Chust tyubeteikas are very popular in many regions of Uzbekistan. Duppi – the most widespread kind of hat of the town Chust – it is characterized by a black background and white pattern depicted in the form of four pods of pepper – “kalampir”; the band is embroidered in small arches settled in the row. There are three kinds of duppi – rounded, roundly tetrahedral and the extended up cap.

The most extended ornaments on them were: pattern in the form of pepper (a symbol of purity and estrangement from all earthly), crosses, tufts of feathers, the motif of a nightingale, a bird (a symbol of supreme wisdom), branches of a rose (a symbol of peace and beauty), the inscriptions by the holy Arabic type and others. 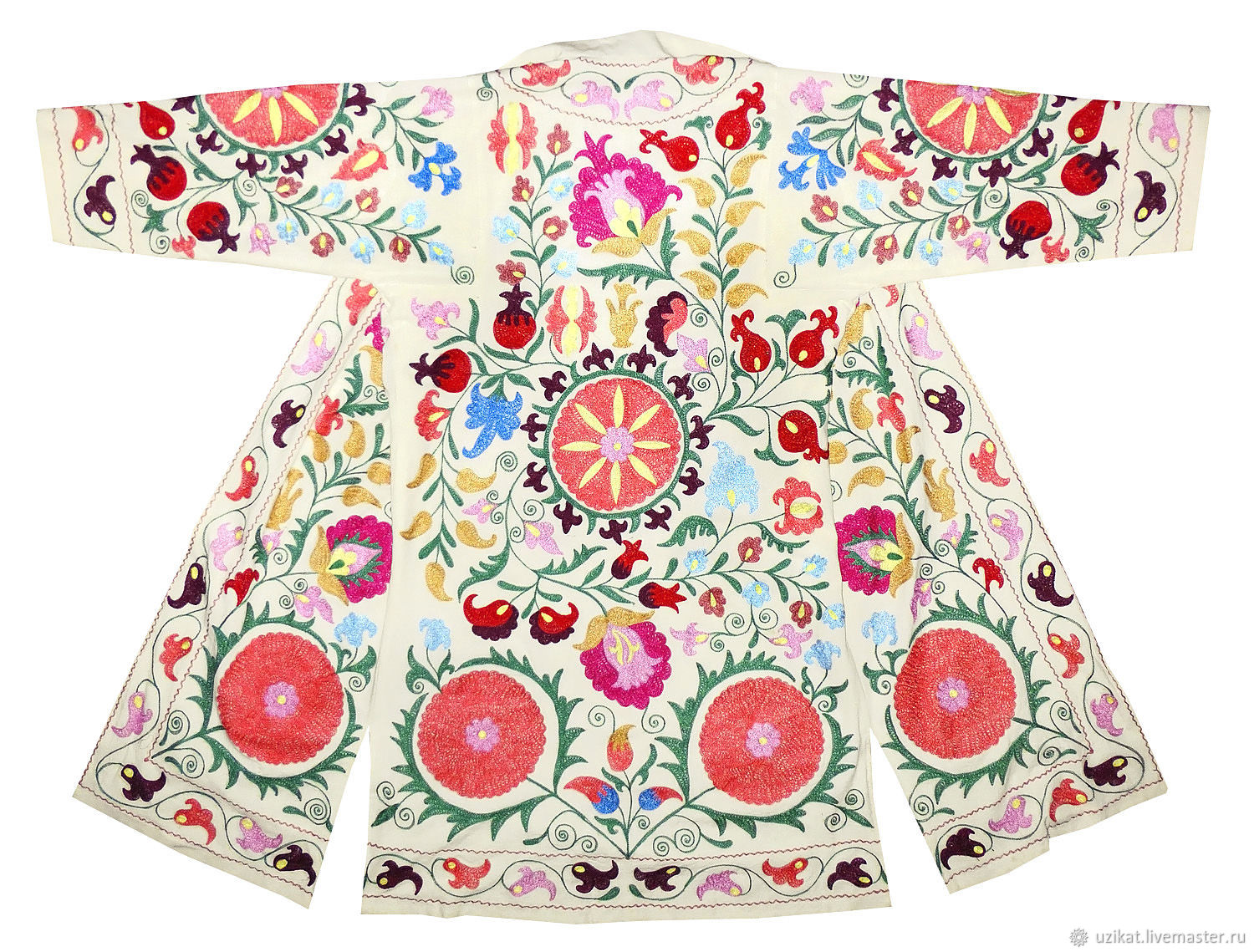