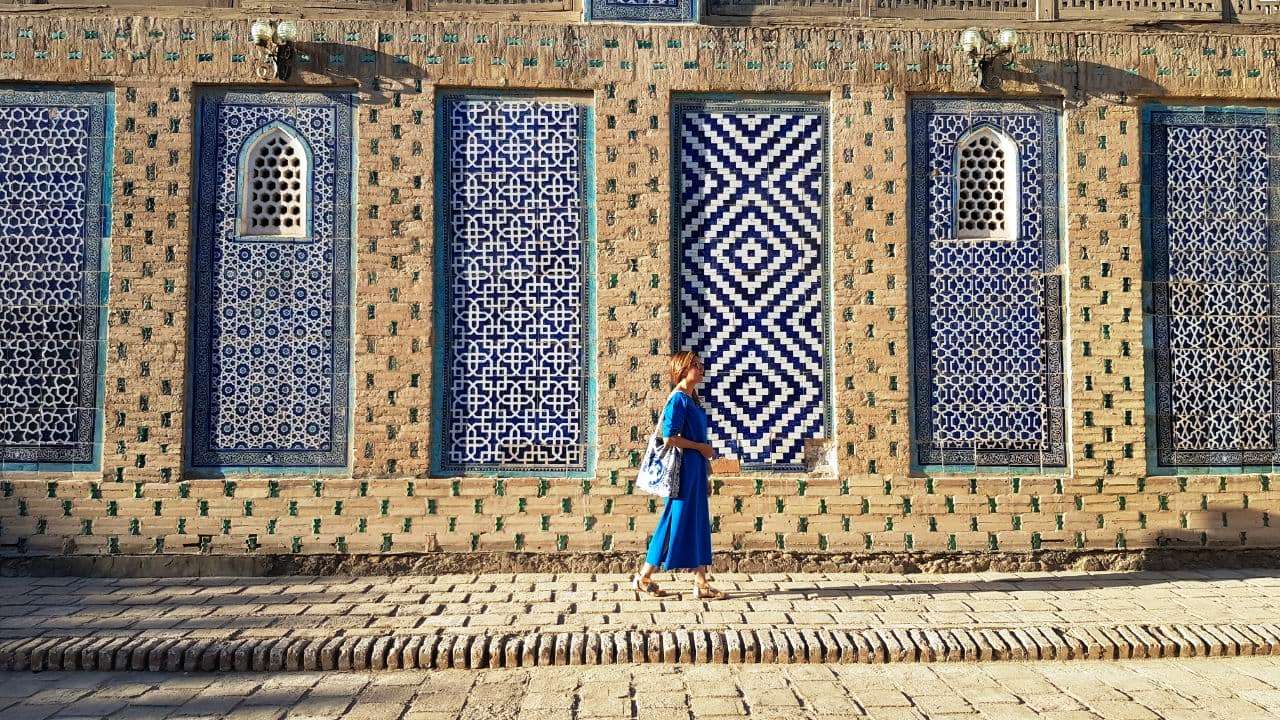 Most of the architectural masterpieces of Khiva is concentrated in its urban centre –  Ichan-Kala. It is "the city within a city" surrounded by thick fortified walls, with four gates – from the four corners of the world. One the main roads passes from the western gate to the east along the main monumental structures.

Ichan-Kala is clearly visible in all its beauty and might from the observation tower Ak-Sheikh-bobo. The unusual silhouette of the minaret Kalta Minar, seemingly cut to the middle, draws special attention. His massive trunk, exquisitely decorated with wide and narrow belts of glazed bricks, indicates the fact that it was supposed to be a grand, immense building as the main symbol of the city. The minaret remained unfinished after the death of the ruler who ordered the construction; therefore, it received the name Kalta, which means “short”. 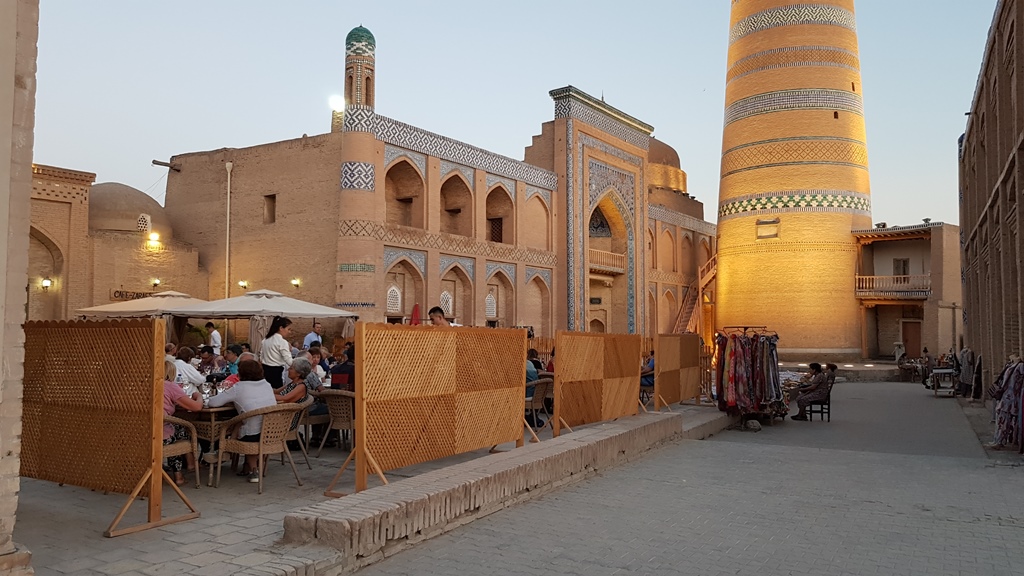 Mukhammad Amin Khan Madrassah, the largest of the surviving buildings of higher theological educational establishments, is very close to the minaret Kalta-Minor. The peculiarities of its architecture are dual khudjras – rooms of the students. The buildings are artfully decorated with the belts of colored brick kits and majolica revetment.

On the territory of Kunya-Ark (Old fortress), the palace of Muhammad Rahimkhan with a rich and unusual inner decoration, is located.  The walls of the hall are trimmed with the pottery carving and delicate coloring. The neighboring two-storied building is a harem with a lot of large halls and living rooms.

Juma Mosque (X century, 1788), is an amazing building with the well preserved inscription of the date 1778-1782 years at the mosque entrance door, while 210 pillars supporting the roof are much older, dated XII - XV centuries. They were borrowed here from other ancient buildings. The columns are wonderfully and impress with well-harmonized proportions shading rich ornamental carvings.

There is an ensemble of buildings at the gate Palvan-Darvaza. The main palace of the khans of Khiva Tash-Hauli takes a special place presenting the inimitable architecture of its various apartments and unique decoration of ornamental woodcarving, majolica revetment and figured cartouche. 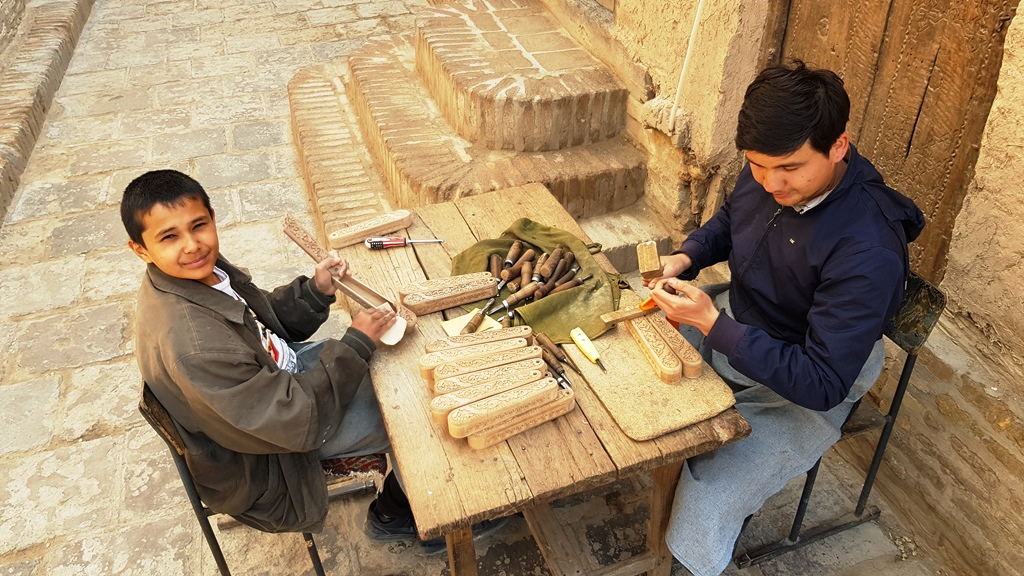 The memorial complex of Pakhlavan-Mahmud was built in memory of the revered poet of Khiva, who was canonized as the patron saint of the city after his death.

Near the complex there is a 45-meters high minaret of Islam Khoja, which is crowned with light and dome on the top.

In the outer part of the city called Dishan-Kala, there are also many ancient monuments. 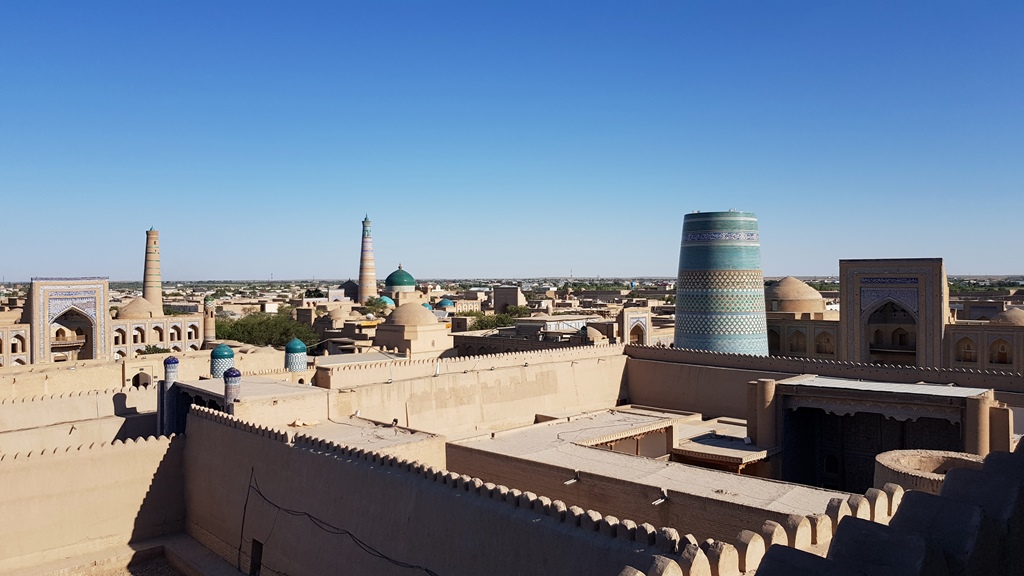