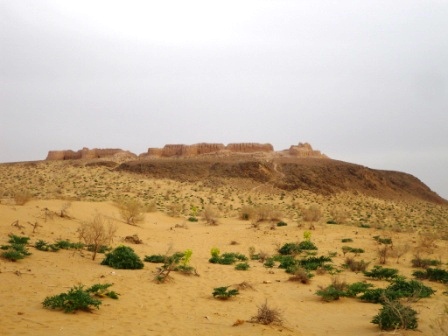 Ayaz-kala is a settlement of the IV-II centuries BC. Ayaz-kala is translated as “fortress in the wind”. It is located 20 km. to the northeast from Toprak-Kala, between moving sands of the Kyzyl Kum and the ridges of the saint mountains Sultan Uvays. Ayaz-kala is situated on the top of the steep hill that is 60 m. high. This is a classical khorezm frontier construction. The walls are turned to the light sides, and the entrance is set up from the south. In the plan of each khorezm fortress there should have been a secret labyrinth, like fortress in the fortress. When the assailants penetrated into this secret labyrinth, they found themselves in the trap, and thus they got the fierce resistance.
According to the local legends, during the period of the great discord, when the old ruler died and nobody could replace him, the priests foretold, that a new shakh should become a man, on which hand the hunting royal falcon will alight. But the bird alighted on the head of a common soldier, and when it was driven away, it returned for the same place for the second time. The people crowned the soldier, who personally supervised the construction of a new castle on the hill, and after he ascended the throne, he ruled it long and fairly. In order not to forget his origin, the 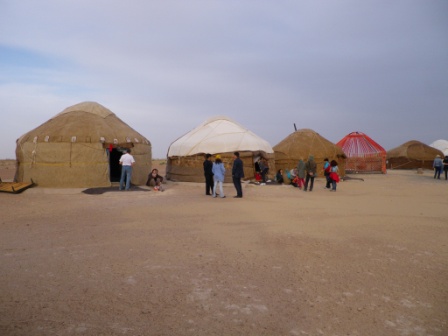 yesterday's soldier, and now the king, ordered to hang the old worn-out boot in a prominent place in front of the throne.
The legend indirectly confirms that in the ancient Khorezm during its prosperity and the regular changes of the ruling dynasties new fortresses and palaces were built with the exceptional easiness.
The most interesting fact is that the fortress remained unfinished and it never became habitable. The piles of large-size bricks, which were covered with sand, and also lack of household items in the excavation indicate this fact.
You get a bird's-eye view of the salt lake Ayazkol from the top of Ayaz-kala. The water in it is very salt, and even in summer it seems that it is covered with the ice crust.