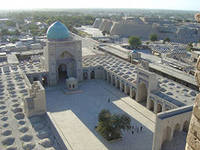 Modarikhon Mausoleum is a women tomb of khan’s dynasty. It is a small portal-dome construction. Unlike Dakhma-i-Shahan necropolis, that looks more severe, Modarihon tomb has more graceful proportions, its walls, dome and small minarets are covered colorful patterns.
Thanks to the inscription, depicted at one of the building’s planch, it is known that the mausoleum was built in 1825. The architecture of the construction has not only traditional tones of the day, i.e. blue and white but ornament decoration has also red, yellow and green colors.
Mausoleum’s name is associated with the name of famous Uzbek poet, wife Umarkhan, Mahlar-Ayim (Nadira). The fate of this woman was tragic. In 1842, together with her sons Madali Khan and Sultan Mahmud Khan, after occupation of Kokand by Bukhara ruler Nasrullah Khan from Mangits dynasty, she was executed.

Other sights of Kokand