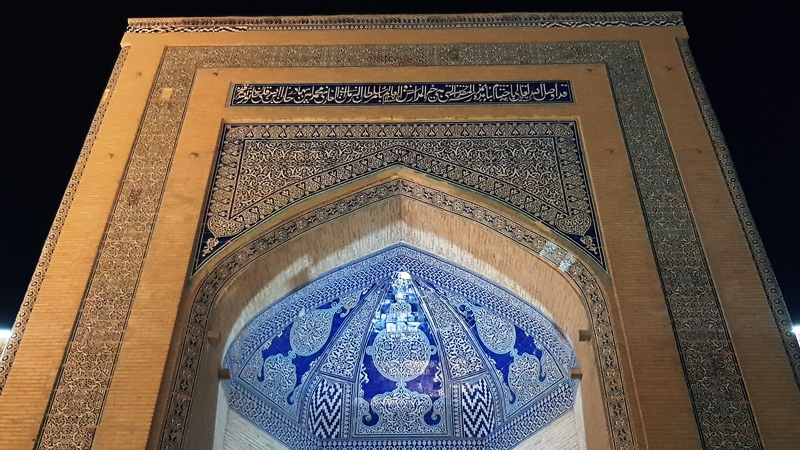 Muhammad Amin Khan Madrasah is the greatest madrasah not only in Khiva, but also in all Central Asia. This two-story building was built by Muhammad Amin Khan from 1851 to 1854.  Architectural monument is located in the western part of Ichan-Kala, the gate-Ata Darwaza. Madrasah has 125 hujras, where held up to 260 students.
Architecture of the building is elegant and beautiful. The portal has a square courtyard and decorated with five domes. There are audience, winter and summer mosques, library and many other rooms. Distinctive feature of the building architecture are arched niches, arranged around the outer perimeter of the building.
Architectural and ornamental works are made in national Uzbek traditions. The minaret is decorated with geometric patterns of colored bricks. The décor is also consists of ornamental carving and ganch lattices. The portal of the main façade is decorated with majolica and patterns of colored glazed bricks.
Nowadays there are travel agency, hotel, ticket office, exchange office and a café in the madrasah. The portal of magnificent architectural monument has the inscription: "This beautiful building will always stand for descendants".