Navroz is the most known holiday out of Uzbek culture. It celebrates on 21st of March and usually get associated like a Muslim New Year.

Also, it became famous because of a 'Day of spring equinox' title. Day and night last the same during this time. 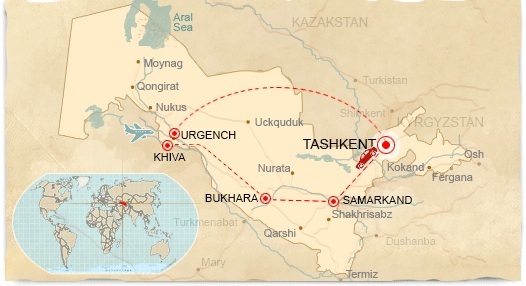 Come out of the terminal and meet with our driver and our company representative.

Discussing all the tour details with our company representative and future upcoming program.

07:00 Transfer to the railway station in Samarkand

08:00 Travelling to Samarkand by the fastest train in Uzbekistan - 'Afrosiyob'

Meeting, transfer to the hotel. Standard check-in time is at 14:00.

Visiting oriental bazaar - Siyab where you can make shopping and see a wide range of goods.

11:30 Transfer to railway station of Samarkand.

Transfer to the hotel, check-in. Free time in Bukhara. Overnight at the hotel.

Transfer to Bukhara via the Kyzylkum desert (475 km). On the way stop to see Amudarya River.

Arrival in Bukhara in the afternoon, check–in the hotel.

19:00 Transfer from Khiva to domestic flights terminal of Urgench.

Meet and transfer to the hotel. Resting time.

- Sightseeing tour of Tashkent (4 hours) to the old and new parts of the city: Amir Timur Square, Theatre Square with the Opera House, Applied Art Museum, Earthquake Memorial, Abdul Kasim Madrassah and Alisher Navoi National Park, Independence Square, Khast Imam Square – a religious center of the city consisting of the Barakkhan madrasah, Kaffal  Shashi Mausoleum and the library of Islamic Literature with the Holy Koran Book of the VII century.

Participation in cooking famous festive meal - 'sumalak'. It's a unique opportunity to make a wish by throwing walnut or small stone into the cauldron. The event is accompanied by funny dances, stories and songs. We promise that you will not be bored!

- Accommodation in a twin room with breakfast
- All the transfers during the program as listed.
- 1-day excursions with professional guides in main cities.

- Entry tickets to all the places listed in program.

Tour price does not include:

- Tickets to the international flights

Tour reviews:
There are currently no reviews
﻿