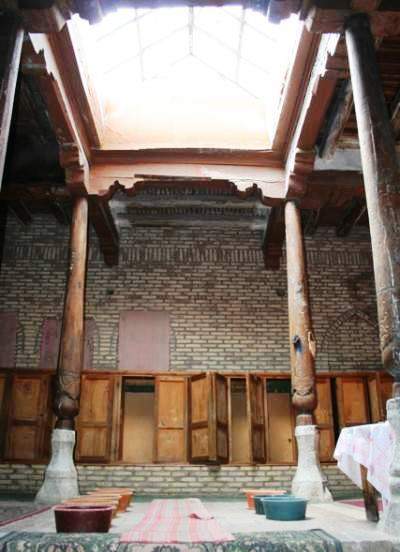 Eastern baths today are widely spread. They are located in Egypt, Iraq, Iran, Syria, Tunisia, Lebanon and here in Central Asia. Traditions of all oriental baths originate from ancient times.
First baths khammams refer to the VII century. It is considered that the Turks adopted from the Arabs the culture to take a steam bath the Eastern way. And the Arabs adopted this culture from the Romans. It is significant that the spreading of Khammams in Asia was simultaneously with Islam. Prophet Mohammed recommended to his followers to take hot baths because “Cleanness – half of faith”.
Two baths which have been working more than 600 years remained in Bukhara. Woman’s bath Khammomi-Kundjak and man’s bath – Bozor-I Kord near Tok-I Telpak Furushon.
Old bath in Bukhara Bozor-I Kord Khammam was built in the XIV century and did not lose its unique traditions and medicinal properties. Visiting Khammam will be the most memorable event of your trip to Bukhara. You will know the world of ancient traditions and feel the “real Bukhara”.
After taking bath you will get a massage. And do not wonder if during the massage the helper will sit or stand on you. These are the peculiarities of massage in Bukhara. Then you may sit in the resting room, drink tea with herbs, relax and talk to friends.
Bath is a separate building with big amount of main and subsidiary rooms. Khammam is heated with the help of a big boiler with water, set under the floor or built-in the wall. The steam formed from the boiling water is fed through a small hole located at the height of one and half meters from the floor. In addition, the entire room is heated by warm air coming into a special tube placed under the marble floor. Because of the proximity of the boiler the floor is heated so that it is impossible to walk without wooden slippers.
Baths in Bukhara are of great historical and cultural interest as typical monuments of civil engineering of Bukhara of the XVI century. They have no rich decoration that is characterized for medieval bath in the East. In engineering technically attitude baths were an obvious achievement of the epoch.