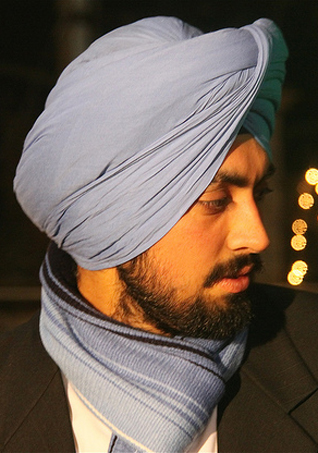 The most famous head-dress in oriental Muslim countries was turban worn by people of all ages and groups of society. At fist turban used as a protection against the searing sun and wind. But later it became a symbol of Islam and even a sign of the government, so it is put on the head during the coronation.

Turban is the main head-dress

With the adoption of Islam turban has become a mandatory turban headdress. It was forbidden to visit mosque and tombs without turban. To show reverence and respect at the meeting with Sheikh a man has to remove the turban from his head. In childhood boys wore special children's hats, but later it was changed to turban.

Turban could tell almost everything about its owner. Even passers can know about social status of a person, his income and other information by the manner of wearing the turban, its size and color. Thus, the court, emirs, sultans and khans wore a turban of medium size from silk, Indian muslin or other expensive fabric.

Wearing turban required special knowledge and experience. Therefore, there was a special profession - dastorbandy who helped nobles wrapped turban correctly and beautifully. For decoration it was usually used stones and bird feathers which were also a symbol of power and talisman.

The representative of higher clergy wore the largest turban. Moreover, it had to be a dazzling white - the color is a symbol of Islam, the spiritual purity and purification.

The length of the turban should be no less than 8 meters. The fabric was used as a shroud, if traveler dead during his way. In other words, the turban is not only a sign of faith but also a constant reminder of the impermanence of life and death.