Bukhara was a center of development of handicraft production for many centuries. Nowadays the work of revival the crafts is being actively carried out. It’s blacksmithing, dyeing, silk weaving, wood carving and others.

Rites of initiation into masters

Young people learn from the masters all the tricks and intricacies and then become masters. There’s particular rites of initiation into masters that is very interested for tourists. This rite takes place in a solemn and festive atmosphere.
Parents present robe and belt for master, because he has prepared young artists to work independently and adjusted to a positive result. 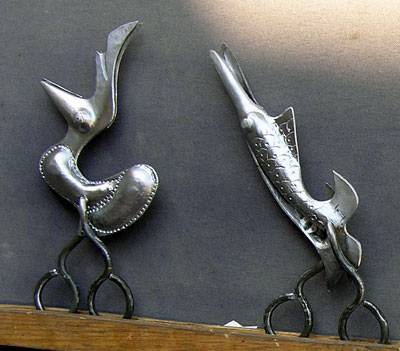 Initiation rites are also carried out in silk weaving, but in this case the master puts on the disciple robe and ties it with a gauze bandage (about 5-6 meters). In addition, as a sign of blessing, the student receives the tools and material. Moreover, the loom is set in the workshop of a new student.

However, if a student belongs to a family of craftsmen, it’s not necessary for him to take part in initiation rites. Blacksmiths begin to teach theirs sons the craft in early childhood. Initially students begin to perform the basic operations and then complicate them. As a result 15 years teenager has already known all about his new profession.
Nowadays the craft of the blacksmith is also considered the most prestigious and respected profession. 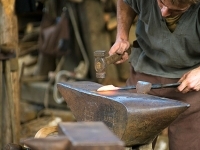 But in ancient times blacksmiths were even considered as magician. So common people often came to blacksmiths and were watching their work. If somebody was ill, he should bring a jug of boiled water.
During his work the master threw a slice of hot metal in a jug. So the water became salutary and helped the man to recover. In the VI century BC Herodotus also told about positive properties of silver water. He recommended carrying water in silver vessels for the Persian king Cyrus.
﻿