Central Asian ceramics is very popular all over the world. It’s beautifully decorated and also transmits traditions and customs of local people. Central Asian ceramics is of high-level quality – it doesn’t change glitter even after many years.
Masters use different images in decoration: simple geometric pattern, a complex plant or interesting zoomorphic and anthropomorphic images.

Central Asia masters actively use a variety of zoomorphic images. They are fantastic birds with magnificent plumage appearance, small ears and a stripe running from the beak to the back. No less popular motif was the fish (in its external appearance resembling sturgeon), as well as

leopard curved and forked at the end of the tail.
Siren is also frequently used image – it’s a bird with a woman's head, which hoisted a strange headdress. It’s
pictured with spread wings and a huge and complex trail. Another unique story - Moon-faced beauty with long plaits playing the lute. Ceramics also include beautiful inscriptions made simplistic kufi script. 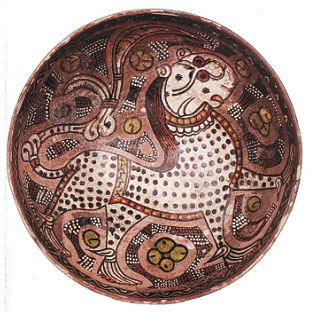 Besides  these colors  masters often used black and white ones.  The main feature of decor was filling the space with large red and white dots.
Along the rim runs a black stripe with an imitation of a kufi inscription performed in fine white lines. Sometimes this stripe is also painted on the bottom of a vessel. In some instances the stripe is filled with wavy lines, zigzags and triangles rather than quasi-inscription.
Such kind of unusual and striking Central Asian ceramics design attracted considerable interest of researchers and collectors from around the world.
﻿