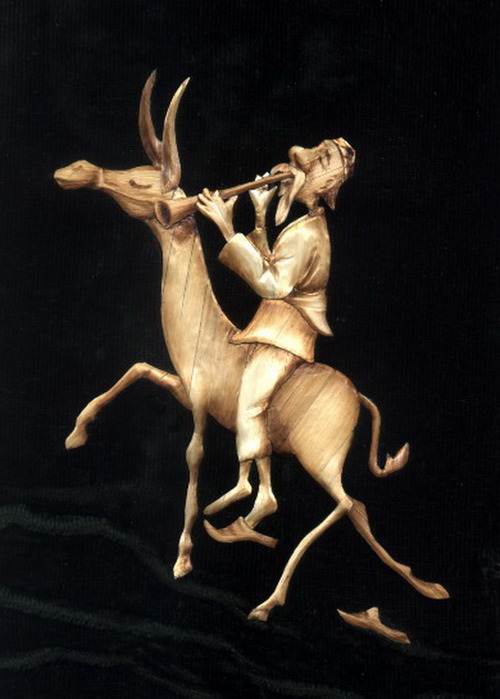 Straw is a popular nature material, which is widely used for furniture decoration and paintings. The craft goes from ancient time, when people had a cult of white straw crops.  People believed that the grain has divine power and tried to use it for home decoration.

The art was widely developed in Poland. Czechoslovakia, Lithuania, Belarussia and Russia. The straw was used for decoration of expensive furniture, creation of ornaments and decorated panels.

More than ten years ago new methods and technology of straw art were developed in Uzbekistan by A. Solihov and A. Yuldashev. They presented unique work made from straw.  The brand name of “Uzbek straw art” appeared in 2004 and now is actively developed and improved.

The artists first used multilayer composition, when each element has its own level and can be located on each other. So composition looks realistically. All elements are making the composition by burning method and this has never used before.

The main theme for souvenir is traditions of Uzbek people, favorite heroes and different folklore stories. Such kind of souvenir will be the best present from Uzbekistan. The area of straw work technologies is wide enough. The straw is using for panels, inlaid boxes, and heraldry.

The main feature of new method is that artist’s fantasy is restricted by nothing. Artists can create both simple and complex composition. So everybody can try his hand at the art.