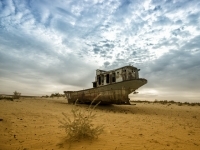 It is considered that the Aral Sea is just 10 000 years old. When the riverbed of Amu Dariya and Syr Dariya divided the Turan lowland was filled with their water. The scientist considered that during its existence the Aral Sea changed its borders 9 times.
Now when the bottom of the Aral Sea is seen scientists discovered some trees which have grown here before. Just in the middle of 19th century it was known the borders of this Sea and it was researched properly.

The reasons of the Sea vanishing

The first and the main reason of The Aral Sea drying is unlimited usage of its water for watering cotton. At the start of 20th century Uzbekistan was the agricultural country where cotton was the base of economy. The second reason is raising land. This process started in 1965. And in 1983 the Sea lost its fishing meaning in Uzbekistan. The canning factory stopped working.

The Aral Sea water now is 80 km far from the city Moynak. Moynak was the port where even today it can be seen ships which never flow. The salty desert now occupies the half territory of previous sea. Now the Aral Sea is dangerous because waste products are open, mixed with salt. When the storm starts, waste products and salt mix with sand, making the worst mixture which influence on people health, crops.
﻿