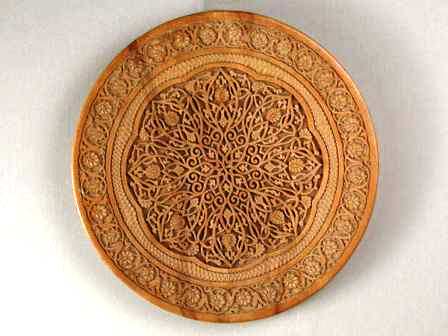 Wood carving art of Uzbekistan is the part of Central Asian art heritage and originates in ancient times.
Khiva today also is one of the oldest centers of carving art in Central Asia.
Carvers from Khiva from old times have been famous for their handicraft. The peculiarity of carving art of Khiva are decoration of doors, gates, cornices, columns and furniture. Carved doors are the distinctive peculiarity of the old city.
Creations of wood carving in Juma mosque in Ichan-Kala are especially beautiful. It was rebuilt at the end of the XVIII century, but retained the features of classical buildings of the East. This original one-storied building without portals, arches and domes is a huge hall with a flat roof, which is based on 213 wooden carved columns. They, different in size, shape and decoration are the high artistic value of the mosque.
Skilled carvers use wood of elm and other local trees. For the preserving of the surface they use cotton or linseed oil. Children are trained to the trade early. When they are fourteen years old, they get the profession.

The tradition of plant ornament of wood carving in Khiva stay stable and craftsmen from Khiva try to keep old traditions of handicrafts and to pass them to young generation. Young men know the secrets of majolica producing with flower and geometrical patterns, wood carving. The doors, made by Khiva masters one hundred years ago are still the examples of high art. And also shogirds – apprentices try to recreate this beauty in their works.
The bright representatives of Khiva carving school is the dynasty of the Palvanovs, who made many carved columns and doors in Khiva of the XIX – beginning of the XX centuries. The works of Abdusattarov and his son Ata Palvanov are characterized with one planned carving with a shallow relief. The ornament is generally vegetable and has the dynamic rhythmic of small sprouts.