This tour is the best choice for those who want to visit ancient cities of Tajikistan and Uzbekistan, get to know the unique culture and traditions of Oriental countries. 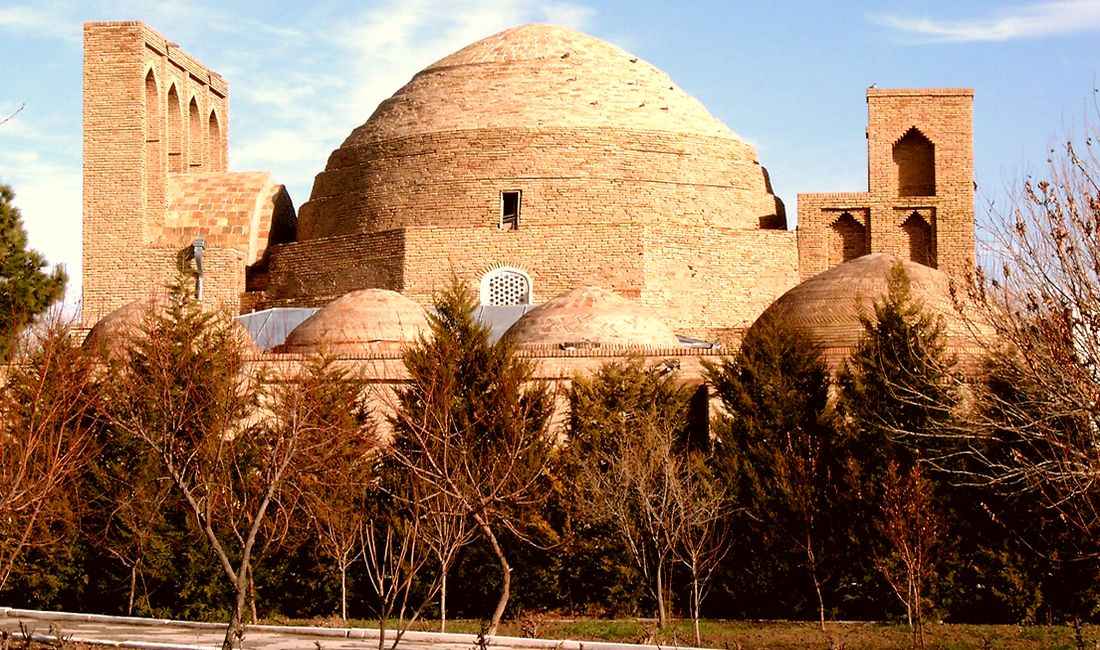 Transfer to the hotel. Accommodation. Overnight.

09:00 Meet up with your guide & driver and drive to the Fergana valley via Kokand city.

10:00 Start excursion in Kokand: Khudoyar Khan Palace (was built by the last khan of Kokand). The majolica of the original scale of colors and the patterns were used in facing, which not meeting in other regions of Uzbekistan. Visits to Madrasah Norbuta-Biy and mausoleum Nadira khan.
Continue driving to Fergana. En-route visit Margilan, a small ancient town. In Х century it was the center of silk manufacture. We will visit a unique factory of manual production of silk (khan-atlas) in Central Asia.

Tourists can track all technology of the creation of silk production from the cultivation of silkworm before coloring of ready fabrics and buy original souvenirs for memory. Also Kaftarlik complex (1742) with the mausoleum of sacred Pir-Siddik is one of the interesting sights.

16:00 Visit Rishtan, a small township located in 50 km from Fergana, glorified by dynasties of ceramists. Here you can also observe their work and to buy original products for memory.

20:00 Arrival in Fergana. Free time. Overnight at the hotel.

08:00 Breakfast in the hotel.
Transfer to Uzbek – Tadjik Border Pass the border called Kanibadan, then transfer to Khujand city.

After a short rest start city tour of Khujand with visiting: Pushkin square with Kamoli Khudjandi Square, Timur Malik’s fortress and Sugd museum, Muslihiddin memorial complex, Panjshanbe bazaar (Khujand’s central market that has many shops offering a different kind of goods and services. The name Panjshanbe comes from Persian language meaning “Thursday”. Panjshanbe is considered as one of the oldest markets in Tajikistan. The Silk Road which passes Khujand city had always made Panjshanbe to be crowded with traders and tourists).

15:00 Visiting Arbob palace (Arbob palace had its particular significance in 1992 when it was the place for the meeting of the Tajik Soviet which officially declared independence from the Soviet Union. Also, it was the site where the Tajik flag was chosen).

09:00 Transfer to Dushanbe by car over Shakristan and Anzob passes (~ 5 hrs).

13:00 Arrival in Dushanbe, start city tour with visiting Tajik National Museum with Tajik pride – the biggest Buddha in Nirvana. Visiting Tajik flagpole-the World tallest flagpole (165 m); the main square of Dushanbe; Monument of Ismoili Somoni-the forefather of Tajik Nation. A 40-meter high monument built to the memory of Ismaili Saman-Khuda, founder of the Samanid dynasty in the X century. The base contains a permanent exhibition on the Samanids ad that is paved in granite slabs. The upper part of the statue is coated with gold.

16:00 Lunch in Choikhona-tea house in Dushanbe where you can enjoy the Tajik traditional food and feel the atmosphere of the East.

Continue to Shohmansur market – one of the biggest markets of Dushanbe, also known as Zeleny Bazaar (GreenMarket). The market reflects Dushanbe's historical ties to local trade.

Drive to the Tajik-Uzbek border ‘Sary Osiyo”. On the way to the border, visit Hissar Fortress- the remains of the Bukhara Emirate Beck’s palace. Its thick walls once guarded a pool, garden, and palace, while the fortress itself opposed a noisy market and caravanserai. What remains today is the peace of wall and gate towers which represent the 18th and 19th-century styles.

The place is famous for its center of commerce during the Silk Road. You will also be able to visit the Old Medressa (Madrasai Kuhna) of the 16-17th century with a museum inside, the new Medressa of 17-18 century as well as Caravan Saray. Continue to the border.

08:00 Breakfast. Excursion in Termez all day long. Termez is one of the most ancient cities, brought a considerable contribution to the development of the Great Silk way which was in due time the basic crossroads of world civilization. It is via Termez in China and in the Far East spread Buddhism and the architectural traditions. The set of Buddhist temples and Muslim mosques were built in Termez.

Sights of Termez: Architectural complex of Khakim at-Termezi, tekke Kyrk-kyz, the Memorial complex of the Sultan-saodat, Buddhist cult center Koratepa and, the ancient settlement of Termez.

20:00 Transfer to the hotel. Overnight in the hotel.

18:00 Arrival in Samarkand. Free time. Overnight at the hotel.

16:00 Dinner. Transfer to the hotel. Overnight.

08:00 Breakfast. Transfer to Bukhara by car/minivan. On the way, we'll visit the workshop of famous Uzbek pottery master Abdulla Narzullaev in Gijduvan city. There you can learn how ceramics are making and even take part in interesting master classes.

19:00 Arrival in Bukhara, check-in the hotel. Free time. Overnight at the hotel.

09:00 Start city tour along the old part of Bukhara with visits to the Mausoleum of Samanids, Bolo Hauz Mosque and the Ark Fortress – the oldest citadel dating back to I century BC, Poi Kalon Square with Kalon Minaret and Mosque, Mir Arab Madrassa.

There are three trading domes or so-called covered bazaars preserved from the XVI century and these bazaars were the centers for trade of silk, jewelry and even for money exchange. Today as well, one can enjoy and purchase different souvenirs of a wide range, from small souvenir magnets to the famous Bukhara carpets.

16:00 Visit Ulughbek and Abdulazizkhan Madrassas, Abdullakhan’s Tim and a visit to the Caravanserai Sayfuddin which is the Center of Handicraft Development of Bukhara, Magoki Attari Mosque and Lyabi Hauz (the center of old Bukhara and an architectural complex of the XVII century). There're Nadir Divanbegi Madrassa and Khanaqa, Kukeldash Madrassa and the monument of the famous historical comedian figure Khodja Nasreddin is also based on this square.

21:00 Transfer to the airport for evening flight to Tashkent.

22:00 Arrival in Tashkent, transfer to the hotel. Overnight.

Then we’ll visit the European part of the city: Amir Timur Square, Theatre Square, Independence Square, Monument of Courage, Tashkent TV Tower and Memorial to the Victims of Repression.

17:00 Transfer to the international airport. Departure.

- All entrance fees to the monuments and museums as specified in the program;

- Full transportation service and all transfers on vehicles with a/c;

- Escort-guide for the entire tour;

- Folk show with dinner in Bukhara;

Tour Price does not include:

• Please note that the drivers do not speak English or can speak only basic English.

• All the changes in the basic itinerary, timing for transfers depending the international flights departure/arrival time are to be discussed and pre-agreed with Tour Operator

One day excursion in Samarkand (1 days)

Excursion to Muynak from Nukus (1 days)

One day tour in Tashkent (1 days)

One day TOUR to PENJIKENT from SAMARKAND (1 days)

One day tour to Samarkand (1 days)

One day TOUR to BUKHARA from TASHKENT (1 days)

One day tour to Khujand from Tashkent (1 days)

One day tour to Khiva from Tashkent (1 days)

Tour to Fergana from Tashkent (2 days)

2 days to Bukhara from Tashkent (2 days)

Cultural-religious tours of the cities of Uzbekistan (7 days)

Bukhara and Samarkand by train (3 days)