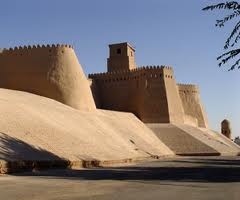 Khiva city lies at the heart of the Karakum desert, on the left bank of the Amu Darya River, 450 km. from Bukhara. The legend tells that it was founded by Shem (Sim), the son of the legendary Noah. Once Khwarezmia, later Khwarezm and Khorezm, was one of the main centers of the Great Silk Road, in the XVI century was the capital of the Timurid dynasty, served as a major slave market and the center of the Khanate in the next three centuries. It is useless to describe the city in words, you should see it. More than hundreds of monuments of various epochs and peoples remained here, that is why in 1967 old Khiva and in 1990 - Ichan-Kala were included into the World Heritage List of UNESCO.

The oldest part of the town, founded, as considered, in the V century BC. lies within the ancient city wall, composed in Ichan-Kala ("old city") complex. The first fortifications at this place were erected in the V-IV centuries BC., today the inner city, surrounded by the wall, includes 60 historical structures. Here you can see such unique historical monuments, as citadel complex Kunya-Ark (1686-1888), the eastern gate of Palvan-Darvaza (1804-1806), the southern gate Tash-Darvaza (XIX century), the northern gate Bagcha-Darvaza (XIX century), the main gate - Ata-Darvaza (1842-1975), the palace complex Tash Khauli (Tosh-Khovli, the palace of Alla-Kuli Khan, 1830-1838), the minaret Kalta- Minor (Kaltar, 1835-1955) completely covered with glazed tiles, and the minaret of the same name (X century, rebuilt in the XIII century), the famous Juma Mosque (1788-1789) with its 218 carved columns, the symbol of Khiva - Islam Khodja Minaret (1910, height 56 m), the minaret Pakhlvan-Kari (XVIII century), the mosque and the minaret Murad Tura (1888), the mosque and the palace of Anush- Khan (1657), Ak-Mosques (1832-1842) Baglandy (1809 ), Khasan Murad Kushbegi (1802), Sheikh Mukhtar-Ata (1810-1838) and Yar Mukhammad Devon (XVIII century), as well as the bastion of Akshi Bobo (XVII) and the trade complex Pakhlvan Kari (1905). 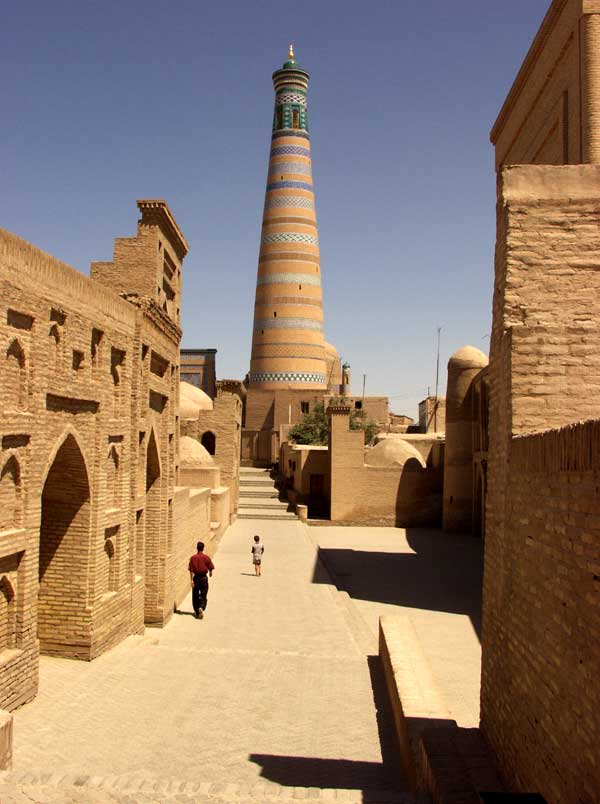 The outer part of Khiva is called Dishan-Kala, and it is a residential and trade area of the ancient city, also surrounded by ancient walls. The suburb Dishan-Kala itself, its northern gate Kosh-Darvaza (XX century), the western gate Ata-Darvaza, the restored gate Gandimyan-Darvaza (1842-1970), the gate Khazarasp-Darvaza (XIX century), Arch Tozabog ( 1910) and the Palace Kibla-Tozabog (1897), the palace of Nurulla-Bai (1910-1918), the mosque and the madrassah of Said Niyaz Shalikar Bai, mausoleums Abdal Bobo (IIX-XVIII centuries) , Shakalandar Bobo ( XVI century) and Said Mukhammad Makhiriy (XIX century), and the madrassah of Said Mukhammad-Khan (1864), Turt-Shaffaz (1885), Bikanjan-Bik (1894), Mamat-Maram (1903), Palvan- Kari (1905) and Khorezmshakh (1915) deserve one’s attention. The mausoleum of Makhmud Pakhlavi, the caravanserai Allah Kuli Khan (XIX century), the Mausoleum of Said Alauddin (XIV century), the house of the famous Khiva photographer Khudaybergen Devanov (1908), the house of Matvafo Karvanboshi (1910) and many other unique structures  are also interesting.